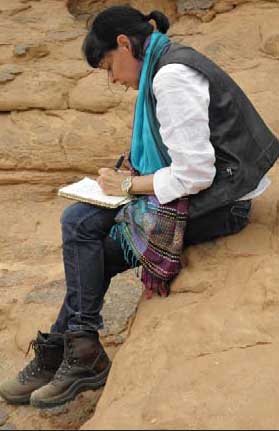 A little over a decade ago I published “The Story of America: A Tribalography,” discussing how Native authors pull together all the elements of their tribe—meaning the people, the land, multiple characters, and all their manifestations and revelations—and connect these in past, present, and future milieus. I argued that “tribalography” comes from the Native propensity for bringing things together, for making consensus, and for symbiotically connecting one thing to another, hence denuding the boundaries between fiction, history, and theory.

In this particular essay, I explored how a tribe, or a people, create stories on the land and embody them in tribal lifeways ever after. Consider Native mound builders 5,000 years ago in the Southeast, who moved tons of earth to create effigies, or stories, embodied within the landscape. Choctaws, Chickasaws, Muskogee Creeks, Seminoles, and Cherokees were mound builders. However, today we no longer build mounds from earth; writers from these tribes build mounds with words.

The same can be said of Plains tribes in that they create poems and fiction with words. While we can see grass dancers at powwows, as they embody the movements of ancestors who indeed once danced down the prairie grasses in order to make camp on the plains, we can also read authors from these same tribes creating stories on the page.

Both of these strategic physical moves of tribal people, mound building and grass dancing, perform a tribal story, as does Native Ballgame. Focusing (mainly) on the Southeastern tribes and Southeastern earthworks, I argue that Native Ballgame is a performance narrative based on cosmic events of solar and lunar return. I suggest Native Ballgame was strategically designed by our ancestors to bring Natives “home” to earthwork sites to celebrate lunar and solar events.

As the motion of space—e.g., land, water, wind—is observable cyclic phenomena, is it any wonder that Natives would create an Indigenous ballgame that’s played counter-clockwise (mimicking water flow, tornadoes, and hurricane winds in the northern hemisphere), one that’s performed on a large field of geometric designs, a game without time limits that evokes the four cardinal directions, and, most importantly, an egalitarian game that anyone can play with a ball and a stick?

If Native Ballgame sounds a little like American baseball, I suggest that cultural exchange happens even when it’s denied by the dominant culture. So as a nose-tweaking alternative to baseball historians and their European-centric-hyperbolic-sympathies, I submit that the roots of American baseball embody Indigenous Southeastern epistemologies, and that the ancestor of America’s favorite pastime is Native. But that’s where the similarities end. Natives running for home on tribal and ceremonial grounds functions as a kind of mnemonic that links a ballplayer’s body to tribal memory of organized social order and to our ancestors’ embodied writings on the land, i.e., the building of ancient earthworks sites.

But what does this have to do with fiction and poetry that Native students are writing and publishing today? Answer: plenty. By studying our ancient pasts, I’ve written a Native baseball novel, Miko Kings: An Indian Baseball Story (2007), written base and ball poems, and co-produced a 30- minute documentary film with James Fortier called Playing Pastime (2006). By studying our past I have made art about the future. This is something that I urge all Native writers to do—create art out of our past, present, and future.

For me, by considering earthworks sites where the ancient games took place, and by studying historical documents, the stylized iconography of the Southeastern Ceremonial Complex found at Mississippian sites, and the way contemporary Native communities continue to play in tribal tournaments (that aid in our survival), I believe a mound of stories will one day rise off the page with enough creative force to knock the cover off baseball, revealing that the roots of the modern game are Native. Another reason I wrote the novel.

Embodied writing then, such as the Native poems and short stories published in this volume, also become part of the larger record of the Story of America: A Tribalography. Native students today continue to write into the 21st century. It is my profound pleasure to have judged this year’s contest for the Tribal College Journal of American Indian Higher Education, and I hope you enjoy the prose and poetry selections by Native students as much as I did.

LeAnne Howe is an author and an enrolled citizen of the Choctaw Nation of Oklahoma. 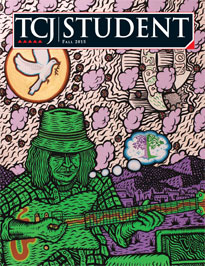 Small Hopes Shine Brightest By Taylor Long Crow
They don’t know where they will go when they die. By Ruby Hansen Murray
The Rez Cat M By Rudell Two Bulls Jr.

Best of the Arts

Altruism: Alvin Adakai By Gregory Ballenger
Yarn Painting By Lori Sebestin
The Struggle Within By Monty Little
Sunset Paint Puddles By Lesley Gravatt
The Other One By Kayla Kent
Malevolent By Echota Cheyenne Killsknight

As our society changes and becomes increasingly complex, now is the time to imagine what sort of future we need and exactly what we need to do to get there. END_OF_DOCUMENT_TOKEN_TO_BE_REPLACED