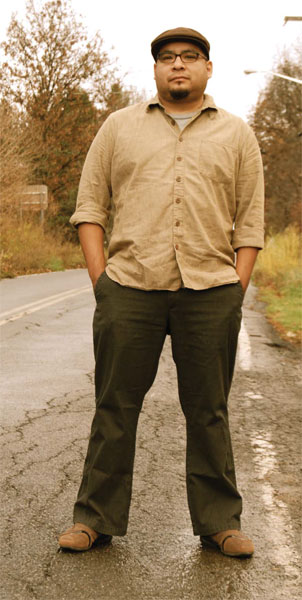 “So while the Progressives allow the noble savage to be the guardian of the wilds and on occasion the conscience of ecological responsibility, the end result of their view for Indians is the same as its counterpart view of American Indians as howling denizens of a terrifying wilderness.”

“It is our awareness of the spirit of a common dedication to the provision of a good life for our children and our children’s children that makes the nations real. Real nations provide for peace within the local community and also within the community of human beings because they exist in the hearts of the people, and peace, the unity of spirit and reason, is the natural condition of society.”

I take the Lakeshore Limited to Union Station, Chicago. After a four-hour layover the Southwest Chief crosses the Mississippi River into Iowa, Kansas, Colorado, and New Mexico. Each state has its own charm, distances to consider, but during these slow hours on the Amtrak—through small towns, Midwestern cities, ranch land, and mountain passes—the erasure of Native people from these landscapes and cityscapes is never far from my thoughts. Occasionally, “Indian”-themed trading posts, pawn shops, and other signage float by my window. These images, for the most part, romanticize western expansion by depicting a stoic Plains Native, usually a male. The likeness is similar to that of Sitting Bull or Geronimo, imposing to be sure, but also prominent in popular American history. This iconography represents the dominant culture’s perspective on Native people. We are signs, mascots, and most regrettably, cogs in a whitewashed historical narrative of how the United States came into existence. Any time we attempt to subvert that narrative we are met with violent opposition, and recent events associated with the Dakota Access Pipeline suggest the U.S. federal government is still intent on eroding our land rights, treaties, and cultural continuity. Essentially, they are still trying to “kill the Indian and save the man.”

I am on my way to observe and evaluate thesis defenses by the third graduating class of the Institute of American Indian Arts (IAIA) MFA program based in Santa Fe, New Mexico. I am also a graduate of IAIA, along with Joy Harjo, Esther Belin, Sherwin Bitsui, Orlando White, Jennifer Foerster, dg nanouk okpik, Layli Long Soldier, and the list continues. Many of these writers have been featured in TCJ as selections for this contest. Lloyd Kiva New, founder of IAIA, was interested in young artists who attempt to create a “complex connection with their cultural heritage,” and express that connection in a contemporary context. In other words, Native artists and writers need unrestricted freedom to express themselves without the burden of creative restraints. This idea is antithetical to the prevailing attitude that, as Native writers and thinkers, our primary task is the preservation of our cultural heritage.

When reading the submissions I was interested in writing that wasn’t overtly political or reactionary, but that attempts to engage a Native American audience, and to a further extent, Indigenous audiences at large. Writing that depicts the mundane through imaginative line breaks or syntax, that engages readers without resorting to cultural tourism or projecting otherness. Furthermore, writing selected for this year’s contest isn’t about measuring up to a static level of “quality,” but about lived experience, and how that experience is translated to the page via poetry, fiction, and nonfiction. Needless to say, I am interested in how we continue to survive under a dominant culture that seeks to dissolve Native nations through political oppression and oblique assimilation. The excerpts below highlight Native people in a contemporary context, whether it be a group of men trying to wrangle a horse at a powwow or a domestic scene depicting a grandmother cooking eggs and bacon for her granddaughter.

“Fences and telephone poles punctuate the freshly plowed miles of Illinois farmland as you evaporate out the passenger window. The face reflected in the side mirror is not yours, the welt rising on the cheek not yours, the driver of the truck is not anyone you know.”

From “The Horse Named Worthless”:

“There was a group of men running after the horse, trying to corner him, trying to grab the money, and doing everything they could to catch him. However, it was no use. The horse was too fast and too smart for the men to catch. After about 10-15 minutes of them trying to catch the horse, the men were scattered laying on their backs and their butts trying to catch their breath all throughout the big powwow arena.”

From “Dragging Through Time”:

“It wasn’t until the seventh grade that Chaske heard the word fag. He had no clue what it meant, so he asked his ina. Upon hearing the word, she gasped for air and her eyes nearly bulged. She took a deep breath and blurted that the word fag meant cigarette, and since he didn’t smoke, it didn’t matter. Chaske was confused as to why the boys in school would call him a cigarette.”

Shímásáni skates to one cabinet
filled with frying skillets,
she pulls out her favorite black pan
for just bacon, eggs–
extra crispy, sunny side.

From “A Long Way from Home”:

“Every day, I wondered if that would be the day my mother would get clean and come back to claim me. Every night, I was disappointed that she didn’t come for me. I suppose during that time I thought the move was temporary as everything else in my life had always been. Every three months we moved to a new apartment, and I switched schools at least once a year. The numerous times she left me at different relatives’ houses was always temporary.”

From “The Duality of Gender and Sexuality”:

“I think the reason I was not persuaded or pressured to change is in direct correlation to the traditional cultural values of my people. The Lakota culture did not see women as lower than a male, or vice versa, rather, we all had a part to do in the up keeping of our band or tribe. We did have gender roles, but they were flexible. This can be seen in the fact that many Native tribes had a very sacred position for ‘two-spirits.’”

Santee Frazier (Cherokee) is author of Dark Thirty and a graduate of the Institute of American Indian Arts. FA

As our society changes and becomes increasingly complex, now is the time to imagine what sort of future we need and exactly what we need to do to get there. END_OF_DOCUMENT_TOKEN_TO_BE_REPLACED