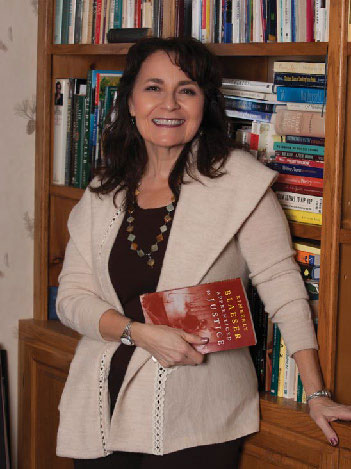 Growing up on White Earth reservation, my brother, cousins, and I fed on stories. Mostly I mean that figuratively— with a wild hunger for stories, we chased them down and devoured them wherever we could. Around camp fires, in fish houses, over the kneading of bread dough we heard stories and a mixture of songs. Often the voices of aunties and uncles would fight one another to get the “true” accounts patched together like a crazy quilt. In the dark by kerosene lantern, our parents or older cousins would read aloud the back sections of The Farmer where spooky tales sometimes lurked amid the milder children’s poems and stories. Sometimes we listened through the heating vents for family gossip we weren’t meant to hear. We also gathered ourselves in attics where we dared one another to tear off, chew, and literally eat small pieces of paper from a trove of old magazines and then try out in our own voices the invention of story destinies. When I think of those years, I also remember the musty “old” smell of second hand books and the brittle yellowing of newspaper pages kept too long. I think the appetite for literature many of us would carry into our lives is a legacy passed to us by Minnesota winters and storytelling relatives.

Significantly, none of the printed stories from that era bore any Native mark. Not until I was in graduate school would I discover “Indian” literature. On my trips home to the rez, I would bring books by Native authors as gifts. My uncle Bill passed his copies around, having everyone who read them sign their names on the cover. I hold out hope one of those will circle back to me one day—the names written there “authors” of a particular kind of revolution if not authors of the book itself. That revolution—the claiming of voice by colonized peoples of this nation—continues in these pages.

In this Trump era, each day the internet and wire services carry news of one threat after another to Native cultural and sacred sites like Bears Ears and Grand Staircase-Escalante National Monument in utah or Cascade-Siskiyou National Monument in Northern California. They carry news of more peril to the environment from mining, logging, or drilling like that by Dakota Access Pipeline at Standing Rock, or by the mines proposed by Twin Metals in northern Minnesota, or Gogebic Taconite in the Penokee Hills of Wisconsin. likewise, our news is filled with troubling statistics about “at-risk” Native youth. In the midst of this always imminent jeopardy, many wonder why as Indigenous peoples we give time and attention to creative work—to the arts. Why literature, music, film, or painting? I say we turn to the arts precisely because of the relentless attacks on our lifeways and tribal lands.

Comanche author and art curator, Paul Chaat Smith makes this half playful but eminently wise claim: “Artists are deeply respected in the Native World. We ask of them just two things: 1) make fabulous art and 2) lead the revolution.” Indeed, many writers have acknowledged the activist role creative work plays in our communities. I often quote Audre lorde who wrote, “Poetry is not a luxury.” for Indigenous people, our songs and poems and stories have never been luxury, they have instead always served our survival and flourishing as Native nations—carrying history and ceremonies, teaching right relationships, and embodying practical knowledge.

Amid our current challenges, poetry, photography, song, and all of the other arts can become agents of change. Writing, like other arts, is an “act of attention”: it asks us first to look at and then to look through what we encounter in our world, to see it differently. Seeing differently is the first step toward change and often leads to action. Clearly, in this capitalistic, colonized, mefirst climate, we need change, intervention—we need artistic invitations to new vision.

Of course, only having a “message” will not make writing successful. In its quest to inspire change, creative work must come alive, entertain, and engage the audience. It must be worth the effort like the stories and songs we courted through floor vents in the long ago days of my childhood. Chickasaw author linda Hogan writes in her poem “Savings,” “This is a poem, not just the truth,” and she also writes, “This is the truth, not just a poem.” I, too, claim that dual reality of creative work. Writing at its best is both “affective” and “effective”—in other words, aesthetically pleasing or beautiful as language and simultaneously does something in the world.

The books that made their way from hand to hand at White Earth in the 1980s—nonfiction works by Gerald Vizenor with family names the readers would recognize, or collections of poems and short stories like That’s What She Said and Earth Power Coming—performed a certain validation for those seeing Native people’s lives in print for the first time, for those reading stories inflected with Indigenous values. But if we could trace it, I believe the trail of change would spread out more broadly in what it might have inspired in thought or action among the readers. Without a doubt, for me that early reading of works by authors like leslie Silko, Anna lee Walters, and Simon Ortiz both fed my story hunger and expanded my notions of what “work” might do or be. Native experience as worthy of attention? Check. Writing as work? Check. Activism as work? Check. Writing as activism? Double check.

Thirty years later, I have also joined the ranks of those ogichidaakwe who feed others with their words. As I read the entries in poetry, fiction, and creative nonfiction for this Tribal College Journal competition, again and again the pieces focused on issues significant to our lives as Native people in 2018—everything from water rights and the sacred use of tobacco to legacies of loss in tribal nations and the various embodiments of discrimination that our youth face. I was heartened to read what these students wrote about resiliency and the beauty of their homelands, touched by accounts of struggles with alcohol or the retelling of traditional stories like that of Corn Mother. But I was yet more heartened to encounter humor and fresh renderings of Native experiences, to see Native values embodied in surprising ways and history given a smartly critical retelling.

Whether recounting the escapades of a nursing home escapee or refiguring our understanding of how science “uses” other creatures in their experiments, the work of these new authors grows out of that small Native publishing revolution which brought me to the work I do today in my own writing and in the college classroom. It also extends it through the more frequent and fluid use of Indigenous languages, through the embracing of a wider range of representations of what “Indian” is, and through an expansion of what Native literature can be and do in the 21st century. Today as I write, row after row of Native-authored pages line the shelves of my library. Still a feeder on stories and poems, still a believer in the power of Native art to renew and lead, when books from these new writers begin to surface, I will feast on them.

Kimberly Blaeser, Ph.D. (Anishinaabe), is a professor of English at the University of Wisconsin-Milwaukee and the author of numerous books and poetry collections

As our society changes and becomes increasingly complex, now is the time to imagine what sort of future we need and exactly what we need to do to get there. END_OF_DOCUMENT_TOKEN_TO_BE_REPLACED