Down and Out in Pueblo 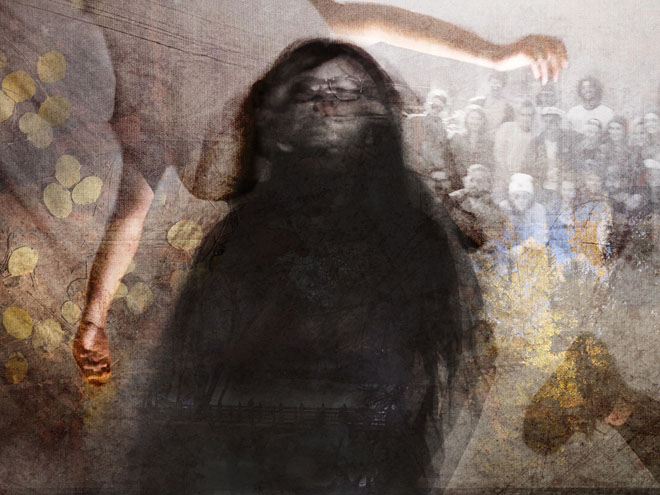 No one knew him in this town that smelled of green chile roasting, like the smoky, sweet beginnings of a campfire with undertones of yesterday’s beer. No one cared if he was living up to his potential, up to their expectations, beyond his father ’s sober shadow. He was just an escapee from the border town of El Chuco, working a shit job in a shit hole, passing through on his way to tomorrow. Maybe that was why he hadn’t left yet; here he kept folks away without hanging a Do Not Disturb sign around his neck, preserving his supply of pepper turkey, baby carrots, and beer. So why in the fuck would anybody talk to him now, when he was finally numb, slathered in silence, and safe from any elbow, giggle, or lyric that pricked the memory of her?

Without lifting his head, Gabino opened his eyes just enough to see. He peered out over red and black checkered floor tiles, the speckled cheap industrial kind, but he wasn’t on a floor. A handful of change and a couple of empties gave it away. Fuck.

He sat up slow, slick, and with both hands smoothed his long hair away from his face. The bar’s edge had carved a sharp dent in his jaw the size of his ring finger. He pressed where it hurt like he deserved it, blinked hard to help his eyes adjust and his mind to boot up. The place was bright as a camera flash though it had been comfortably dusky when he’d arrived for a quick drink before dinner. The bartender was half-ass washing glasses with one hand because he had already poured himself a cold one. Somebody else was sweeping feebly. The sticky floor wasn’t giving up shit.

Gabino threw a twenty on the bar then wondered if that covered it. He tossed out another ten, his food budget till payday, since there was no need to face the bartender. As it was he’d have to find another saloon in walking distance or buy a goddamn bottle and drink it in his room.

Nope. He needed to knock that shit off. He was thirty now. That worthless wait list with his name on it was in the law school trash for sure, his class halfway through their JDs, his wife gone. Other side of the world gone. Boozing himself to oblivion wouldn’t bring her back.

If he drank enough, though, she didn’t cameo in his dreams. He didn’t dream at all and could numb his subconscious. But that couldn’t be healthy. He needed to piss bad.

“We’re closed.” The sweeper blocked his way to the head. “Exit’s that way.”

Gabino put up his arms in surrender and nearly toppled over.

“Hey, hey, hey!” The dude reached out his broom, clearly undecided about whether to steady or whack him. “You need to go.”

Gabino turned and faced a giant baby man, the kind Coach wanted fattened up for the line so his parents fed him rib-eyes thinking he’d make millions playing for the Broncos. They vowed to love the kid even if he signed with the Raiders, only to have him wind up good for nothing, pushing people around at closing time for minimum wage and all the keg beer he could chug.

“You need to go,” he huffed. Maybe he wasn’t legal and he already had skin tags on his neck where layers of whiskered flesh sandpapered together.

Gabino smiled. “My brotha,” he said. The last syllable came out like puberty because Bubba threw Gabino over his shoulder like a bag of cheap dog food and tossed him onto the sidewalk beneath a neon sign that proclaimed, “TAVERN.”

“Fuck off yourself,” Gabino shouted, though maybe only in his head. from his back on the sidewalk, he heard the deadbolt lock. He tried to hop up, trusting it was past the neighbors’ bed time, but tumbled back onto a new patch of raw skin. The concrete was cold and unforgiving. He linked his hands behind his head and watched the stars flicker their disapproval.

Rowena Alegría is a student at the Institute of American Indian Arts.

As our society changes and becomes increasingly complex, now is the time to imagine what sort of future we need and exactly what we need to do to get there. END_OF_DOCUMENT_TOKEN_TO_BE_REPLACED