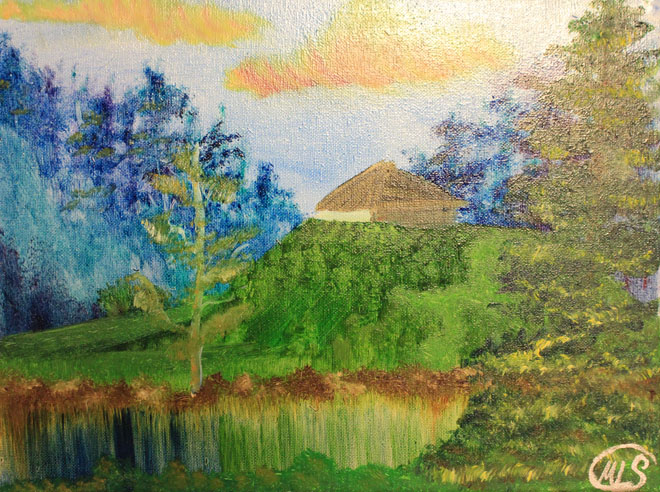 Green by Miranda Lauren Sanders of College of the Muscogee Nation

I was once told that if you don’t know your clan, you aren’t really Mvskoke. The first time I heard this, I felt pretty hurt and confused, as if they were accusing me of pretending to be Mvskoke. It made me feel fake. It drove me to hunt for the answer to the question,“ What is my clan?”

My mother and her sister were adopted out to a white family a decade before the Indian Child Welfare Act (ICWA) was passed. Being born in a small town, my mom’s local hospital even fudged the records to say that her adoptive mother actually gave birth to her. Why they did this I will never know, since there are adoption papers that contradict that birth certificate. My mom and aunt were raised with little to no exposure to Indigenous culture. They both had their CDIB cards, sure, but their adoptive parents never brought it up or offered to explain it until the girls were almost adults.

I was 24 years old, a month away from turning 25, when a professor at my college told me that she knew of my biological grandmother, a woman named Cheryl.

I did all the digging I could do in old Dawes roll census cards and public records to find her on my own. Even though I knew she was still alive, and even what town she lived in, I still couldn’t just call her up. I could find no appropriate way to contact her. You can’t just show up at a 74-year-old woman’s house whom you’ve never met before and say, “Hi! I’m your granddaughter!” It just isn’t done. But my professor had an idea.

I was to write a letter to Cheryl and leave it with the manager of Elderly Housing. My letter was nervous and while I tried to restrain myself, I am sure that my excitement was evident in my writing. I had wanted to meet this woman since I was a teenager.

The letter went something to the tune of “Hi, my name is Miranda. My mom is your daughter. I was wondering if you would like to meet or speak on the phone. You can contact me at etcetera etcetera.”

I delivered the letter.

The next morning, I found a voicemail on my phone from a number I didn’t recognize.

My heart beat so hard in my chest that I felt dizzy, as I listened to the voice of the grandmother I had never met. She and Mom have the same exact laugh.

I shakily dialed her number to return her call. She picked up on the second ring. Cheryl said that she wanted to meet me, an offer I enthusiastically accepted. At the end of our conversation and after hanging up, I couldn’t help but do a small victory dance around my kitchen.

One week later, I stood with wobbly knees and a hopeful heart in front of her house. She lived in one of the newer units of the Elderly Housing complex. I knocked.

She answered the door with a hesitant smile and waved me inside.

We sat down and she asked, “I’m sure I already know what you want to ask me. You want to know why I did it, hmm?”

I considered this and shook my head. “No, actually. I’m sure you had a good reason. And my mom turned out okay. Her parents loved her. I think that it all turned out for the best. I guess what I would really like to know is if you know what our clan is?”

I had managed to find out the tribal towns associated with my family line from some old census documents, but clans are passed down via oral tradition, from mother to daughter, so there was no record that could tell me what clan we were.

She leaned back in her chair, thinking. “We were very, very poor.

I wanted your mama to have something better. You know, your grandpa always sent me pictures. Up until he got sick, anyway.” Cheryl paused and pulled out an old shoebox full of baby and school photos of my mother, my aunt, and all of us grandchildren. I felt warm. I’m glad that grandpa did that for Cheryl.

While I was looking through the box, sifting through the pictures, she continued to speak. “Mama wasn’t very traditional, and Dad died when I was just three, but if I remember right, we are Bear Clan.”

A relieved sigh escaped my lungs like a ghost being exorcised. Nearly a decade of anxious not-knowing, and one sentence from her made it all go away. oddly enough, I always suspected that the women in my family were Bear Clan. It just felt right. To have suspicions confirmed was a gift, a gift that I acknowledge not many people get to receive.

I realize that I am very lucky. The Indian Child Welfare Act prevents children from being taken away from of their culture and their people. Those affected by the pre-ICWA era boarding school and adoption policies will likely never get closure. Healing with unanswered questions is hard. I imagine many don’t even know who their biological family is.

Having been given the opportunity to learn about my culture by attending my tribe’s college, learn the language, and even meet my grandmother, I feel so blessed. However, the story doesn’t end there.

Recently, my mom told me that she finally called Cheryl, and they spoke for the first time in 30 years. Cheryl ended the phone call with “I love you.”

Finding Cheryl began with one question, but the resolution has given me so much more than one answer.

If you recall one thing from this story, dear reader, let it be that the Indian Child Welfare Act is important, and that you are never too old to reconnect with people you may have thought were lost.

As our society changes and becomes increasingly complex, now is the time to imagine what sort of future we need and exactly what we need to do to get there. END_OF_DOCUMENT_TOKEN_TO_BE_REPLACED