Beth stood in the middle of the Mojave, her eyes cast up towards what she’d always considered an abysmal, black sky. But now in the silence of the desert, galaxies revealed themselves just beyond her icy touch.

She didn’t dare blink for fear of missing a single second of a sky that seemed to beckon to her. Her body heaved, air catching momentarily in weak lungs before releasing those scarce breaths to hang heavily in the desert’s all too crisp air.

Perhaps, she thought, each star was a different memory flashing before her eyes moments before her universe was extinguished. The corners of her mouth twitched into a painful smile. “I hope,” she thought, “I hope it was worth it.”

Tears stung at eyes that begged to be shut, breath catching in her throat while she thought back to years that were far too short and immeasurably painful. “Why?” She cried out to the loneliness that surrounded her, “Why now?” Beth lay in silence on the hard desert floor, waiting for some sort of celestial sign that everything would be ok, but her only answer was the distant and mournful cry of a coyote.

She knew there was no justifiable answer to her questions. “This is all my fault, isn’t it?” her voice was hoarse, and she gasped for breath between each sob, “I’m so sorry, I’m so sorry for whatever I did!”

Beth folded in on herself; her eyes squeezed shut at last, arms wrapped together. Her fingers brushed past dozens of scars and fresh wounds. She shook her head trying to force painful memories of abuse and depression away, with little luck.

“Get back here!” was shouted across the barren desert; the voice stern, angry, and all too familiar. Beth shuddered and pulled her arms over her head, cries strangled in her throat as she fought to be as quiet as possible. “What did I tell you girl!”  The man’s voice was closer and growing louder, and more shrill.

“How dare you disobey me! Now look at me when I’m talking to you!” His words exploded in her ears, forcing a sharp sob from the girl as pain from old bruises and split flesh resurfaced like memories.

“I,” she stuttered, forcing herself to look up,” I’m so sorry Dad.” Beth’s breath rushed from her lungs as she stared at the faceless figure that bore over her like a mountain. The flat surface wavered momentarily and she let out a rasp of a scream as it shifted to the familiar faces of her father and the countless other men that had caused her misery.

“What did I tell you?!” The voices of each man pooled into one terrifying shriek. It watched her quickly crawl backwards and away while she tried shout for help, but her lungs were already too weak.

The fiend took a single step towards the girl, its arm jerking back in preparation to strike. Beth raised her arms in defense, body tense, ready to receive the blow like all the times before, but it never came.

Shaking, she slowly opened tear soaked eyes. Nothing; glancing around there was nothing to be seen for miles but cacti and rocks. In fact, she hadn’t even moved from her original position. As realization set in, she collapsed in on herself and fell flat on the ground.

Her eyes opened once more to the expanse of stars overhead as tears streamed down either side of her face. “It’s not your fault.” The words were so soft they were nearly as intangible as the mouth that spoke them, yet they resonated through her entire being.

“Why is this happening to me? What’s going on?” Her words were barely uttered over her breathless weeping, and she was far too weary to bother escaping whatever creature would taunt her next.

“My dear child, every soul who wishes to find peace in a method such as this must first confront their demons.” The incorporeal voice had shifted, and now sounded as if it was coming from her side.

Beth cast a quick glance towards her right, wholly believing she’d see another monster similar to the one that petrified her before. However a simple coyote sat at her side, gazing directly at her. “Is that what that thing was, a demon?” She questioned, unsure if the voice was emanating from the animal or not.

The coyote glanced into the distance, half-heatedly following its gaze Beth nearly cried out when her eyes fell on the silhouette of the creature on the horizon. “You are haunted not by a true demon, but by the misdeeds of others.” The spirit cooed, peering back into her eyes. “I’ve come to tell you that what they did was never your fault. These individuals harmed you when they refused to acknowledge their own flaws and shortcomings.”

Beth looked back to the clusters of stars above, her breathing labored. Too weary for openly weeping, tears merely ran silently down her face. “I just wanted them to love me, I was so afraid of being alone” She sighed, hand reaching out to rest on the coyote’s soft pelt as it curled up next to her, its head resting on her chest, with eyes still on hers, “Thank you, it doesn’t hurt anymore, but I’m so afraid now. Please don’t leave me.”

The coyote tenderly cleaned drying blood from her cold, limp wrists. Its voice once more ethereal, “You don’t have to be afraid anymore, my child. I am here with you. You don’t have to hurt anymore.”

The spirit shut its eyes and lovingly rested its head on Beth’s chest. The corners of her mouth trembled, breath rasped in her chest one last time, “Thank you.” She whispered, clutching at the coyotes fur. Her unblinking gaze remained on the endless expanse of stars that no longer rested just beyond her reach.

Misty Daniels attends Fort Peck Community College where she majors in computer technology. As an aspiring game developer she uses her history in writing to help form elaborate story lines and complex characters. 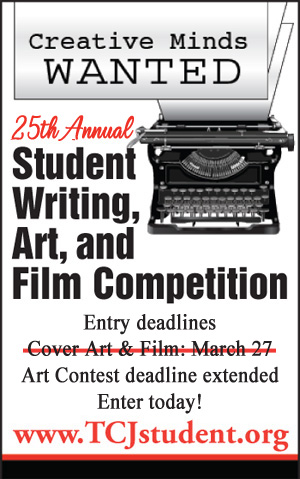 Even in the midst of a pandemic, there is a future that’s worth planning for and looking forward to—and it’s on us to make that the best future we can. END_OF_DOCUMENT_TOKEN_TO_BE_REPLACED

Sometimes our various responsibilities pile up, forcing us to go that extra mile to achieve our goals. END_OF_DOCUMENT_TOKEN_TO_BE_REPLACED

In her farewell blog post for TCJStudent.org, IAIA student Scarlett Cortez reflects back on the past year and what it means to share your lived experiences with others. END_OF_DOCUMENT_TOKEN_TO_BE_REPLACED