“I was living with relatives in a one-room tarpapered house on the Crow Creek Sioux Indian Reservation in South Dakota when I learned to read English, and as soon as I learned to read, I wanted to write.”

That’s the way I started my recent compilation of writings called Notebooks (U of Arizona Press), but what that little phrase doesn’t say is that I wanted to write because I was learning to use language and becoming enamored with words.  I grew up in a home where two languages (English and Dakota) were spoken all the time, and then went, briefly, to a Catholic boarding school where they still used Latin in the saying of the Mass, and I was fascinated by the confluences of the words that people used to try to express vastly different worlds and ideas.  It wasn’t until I read N. Scott Momaday’s essay “Man Made of Words” decades later that I really understood the impulse to love language, to write and tell and describe.  By that time I knew it wasn’t about ME, nor what I needed or what I wanted, and not even about any kind of national cultural movement or social and political shift in American perspectives about the world I knew. 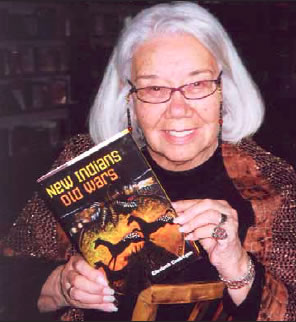 It was truly, for me, about language and how to use it effectively and WHY.  It took me a long time to use English well, and I published nothing until I was forty. This means that my writing experience may be from a different era than the writing experience of most of the young writers whose work is published in this issue.  It is useful to ponder these differences.  Recently, I was reading an essay by a New York editor and critic, Ted Solotoroff, who said, “I don’t think anyone can understand the literary situation today without dealing with the one genuine revolutionary development in American letters during the second half of the century, the rise of the creative writing programs.”  For no one is this more compelling than for the current American Indian writers of novels, poetry, and stories, since more American Indians than ever before are now enrolled in college and are participating in these kinds of academic programs.  And it is especially compelling for those of us who arrived on the scene too late to have participated in that academic movement either as students or as professors.  The history of American Literature, therefore, is often correlated with major historical trends, but the one defining trend that comes out of the latest work is that the craftsmanship rising out of those programs is an enviable contribution to all genres.

I am impressed by the ease with which Ken Taylor’s crucial use of dialogue moves the plot in a story like “Blackjack and Coal Dust.”  I am moved by such unforgettable references as “I am secret keeper of a Nation’s Pain.  I am dancing near the end of our beginnings.  I am the journey, destination, weary traveler.  I AM KINNIKINNICK.”  It is stunning that Rayleene Elliott can get us from “Here’s to cruisin’ the Rez” to “the 22,000 who died in a twenty-year time frame to Mission San Diego de Alcala.”

To use words with care and compassion is the ultimate effort in analyzing the present dilemmas, and I am genuinely honored to have been asked to read these works.  These works signal the future for all of us.  It means that self-knowledge and cultural revitalization is possible in a flawed world of relentless struggle.

Elizabeth Cook-Lynn graduated with a BA in English and Journalism in 1952.  She obtained her Masters of Education from the University of South Dakota in Education, Psychology and Counseling in 1971.

Cook-Lynn is widely published, including in anthologies, textbooks, journals, and online. She has written 11 books altogether.

Black Jack and Coal Dust By Kenneth M. Taylor
I am Kinnikinnick By Amanda Irvine-Louie
My Rez Car By Andrea Goodwin
The Biscuit Brothers Go Fishing By Larry D. Madden, Jr.
My Big Sky By DeAnna L. Sosa
“Venison” Vyron By Shane Dixon, Sr.
Trotter’s Trade By Nate Arbuckle
Hunting on the Reservation By Gerald “Joe” Kirkish
Hail to the Grape Soda By Gerri L. Williams
Courageous Youth By Portia Koebach
Waiting for Spring By Melanie Howick Erickson
Elements of a Piast (Social dance of the Tohono O’odham) By Amy R. Juan
Here’s to Cruisin’ the Rez By Rayleene R. Elliott
The North Woods By Timothy J. Hearson
The Path We Will Walk By Thomas Conine
Soft Talker the Dawn Bearer By Kyerin Bennett
Lorraine By Sharris Neary
A Road Less Traveled By Daniel Eli “Zeke” Gazelka
The Persistence of Life By Patrick Freeland
Baa áłchini ya áhólyáa By Laura Lee Yazzie
Resonance By Heather Snell
The Drive Home By Michael Morningstar
One Morning in Early September by Karen Little Thunder
Just About a “Half Breed” By Kathryn Roper
The Gift of Life: Friendship By Sheena Begay
Finding Family By Christina Adam
Conflict in the Sand: Operation Desert Storm By Jason Young
Kingdom of Heaven By Micki Lindeman
I Had to Change My Life! By Royce Collins
Boozhoo, Anishinabedog By Marjorie Eagleman

Hail to the Grape Soda

By Shane Dixon, Sr. As I walked…

The Path We Will Walk …

I walk in your footsteps, But I… 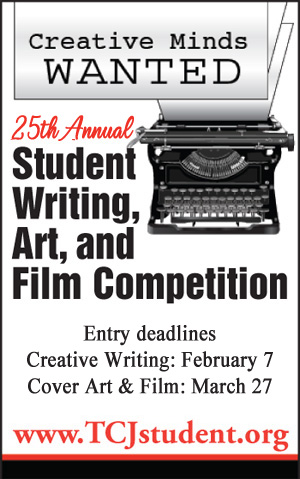 Friendships and connections are important, but accepting the help and guidance of people who have gone where we want to go is invaluable. END_OF_DOCUMENT_TOKEN_TO_BE_REPLACED

Sometimes our various responsibilities pile up, forcing us to go that extra mile to achieve our goals. END_OF_DOCUMENT_TOKEN_TO_BE_REPLACED

In her farewell blog post for TCJStudent.org, IAIA student Scarlett Cortez reflects back on the past year and what it means to share your lived experiences with others. END_OF_DOCUMENT_TOKEN_TO_BE_REPLACED