Playwriting, Part One: Setting the Stage in Your Community 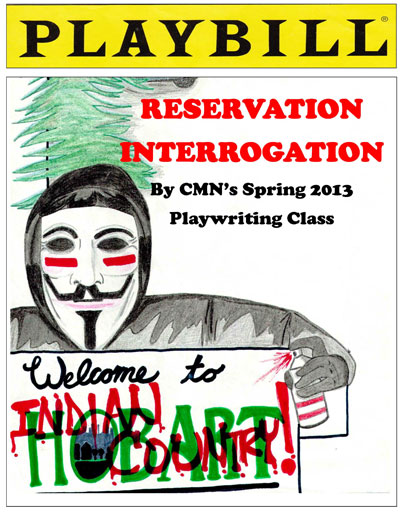 At College of Menominee Nation (CMN), we produce professional plays to great fanfare. But it’s our original shows that truly resonate with our patrons. Writing our own plays is an experience that connects CMN’s students with their community by dramatizing the issues facing the current generation. In the past we’ve tackled topics such as racism in border towns, the ownership of traditional artifacts, and the history of America’s Indian blood quantum policies. The enthusiasm over our original shows led us to partner with the Oneida Nation Arts Program to stage readings and productions of new Native plays from across Wisconsin in 2015. The positive reaction to what we called the first “Wisconsin New Native Play Festival” led us to plan a second one for 2017 that will reach more of the state’s reservations.

CMN’s continued success helps to affirm my belief that Native writers should embrace playwriting. I’m not the first to see theater as an extension of the oral tradition, nor will I be the last to witness that a live performance, as it mirrors or challenges the audience’s views, can elicit catharsis. What’s more, playwriting is no easy undertaking. Here are a few tips to ponder as you consider crafting stories for the stage in your own community.

1. Pick a complex topic, but be mindful of your audience’s views.

It’s important to choose topics that engage our audience, but we must not use our script as a platform for preaching one side of an issue. In my classroom, I begin by asking my students to list which topics their communities are currently debating. I encourage them to consider issues affecting their families, tribes, and even the buzz on their social media feeds.

The best topics don’t have a clear right or wrong side to them, but rather set the two sides in opposition and allow our characters to debate. This was the case in our play, Blood Quantum: Fifty Shades of Red. Set at a fictitious general tribal council meeting, the play dove into the past, present, and future of the Oneida tribe’s enrollment requirement. We didn’t clearly side with lowering or raising the amount of tribal blood one needs to be enrolled, rather we tried to present every opinion—serious or ridiculous—on the matter at hand. We inspired a lot of discussions and many compliments, but as far as I know we didn’t offend anyone.

2. Conduct some research, especially if the topic is based on true events.

We writers must not overlook the importance of research. Without accurate information a writer can mislead an audience, cause them to dismiss a topic as completely fictitious, or offend people who see the truth of the matter as being over-simplified.

In our play The Oneida Tribal Belt, we speculated what would happen if an antique shop were to acquire the wampum belt that was used to unify the splintered Iroquois Confederacy after the American Revolutionary War. This meant that the wampum belt housed in The Field Museum in Chicago was a fake. Our farcical plot involved two separate thieves trying to steal the artifact. After my class consulted the tribal historian and various archival records, we learned that the reason the actual belt is at The Field Museum is because the three Oneida nations all have repatriation claims to it, and so the museum is holding it until the tribes decide upon a rightful owner. As we dug deeper our script switched from being purely entertaining to supporting a potential solution that allowed the three nations to share the belt. Semesters later, we’re still being thanked for bringing the complexity of the belt’s ownership to the forefront of our audiences’ minds.

3. The more conflicts, complications, and crises the better.

Our plays should have a sense of urgency, as if there is only a finite time for our characters to reach a solution. They must also convey a sense of real consequences, regardless of which actions our characters choose to take.

4. Remember that theater is not film, and so use its strengths to your advantage.

The differences between theater and film are often what makes a play resonate. Whereas film uses quick scenes, theater builds its story by growing the conflict within a scene. Film uses multiple settings and time changes, while theater builds on a few established settings, often over a short period of time. Film uses close-ups to focus an audience’s attention, but theater allows them to shift their gaze from the center of the action to whatever’s brewing in the background.

Each Native nation has its own grievances. While political meetings are the best place to discuss legislative changes, the stage is the place to infuse some empathy through storytelling. It encourages dissenters to listen, the righteous to consider others’ perspectives, and often employs humor to get the job done. Regardless of whether Native stories are told around campfires or under stage lights, the power of the spoken word is always palpable.

Ryan Winn teaches English, Theater, and Communication at College of Menominee Nation, where he has been recognized as the American Indian College Fund’s Faculty Member of the Year.

There are many common pitfalls that can…

The power of language is that it guides the way we think and the way we view things, especially in relation to one another. END_OF_DOCUMENT_TOKEN_TO_BE_REPLACED

Sometimes our various responsibilities pile up, forcing us to go that extra mile to achieve our goals. END_OF_DOCUMENT_TOKEN_TO_BE_REPLACED

In her farewell blog post for TCJStudent.org, IAIA student Scarlett Cortez reflects back on the past year and what it means to share your lived experiences with others. END_OF_DOCUMENT_TOKEN_TO_BE_REPLACED