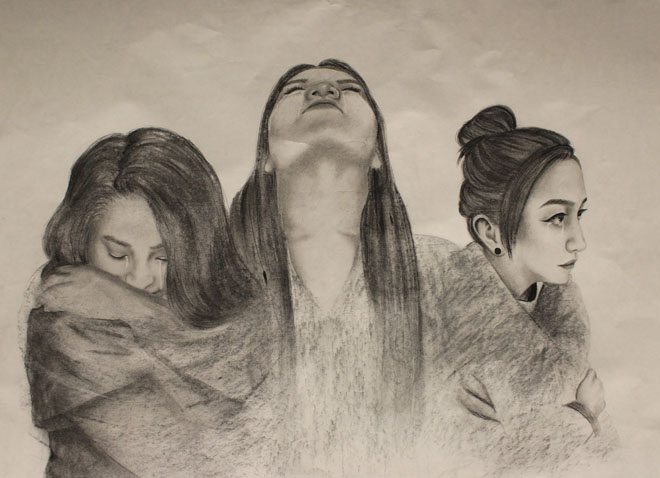 There was a reason why I hated dressing rooms. for a while, it was a subconscious thought. Mom would stockpile me with clothes, shooing me in the direction of the dressing rooms. But I would always refuse, my knees would lock and my chin would tremble. This went on for a couple school years before my mom finally gave up with a disgruntled sigh and a roll of her eyes.

“Fine,” she’d say. “I don’t care. Hopefully they fit then.” It was a snarky reply, full of an attitude I had yet to master, and it left me with a feeling I couldn’t quite name.

That name to that feeling came later. Much later than I thought possible because I should have known what that feeling was that filled me from head to toe when my mom continued to berate me when I refused to go into a dressing room—shame.

And the reason why I felt that emotion each time wasn’t because of what my mom would say or what she thought. It wasn’t even about my body, which is what various members of my family chalked up this irrational fear to.

“Self-conscious,” they’d say, shrugging as if that solved it. But I knew that wasn’t the reason. The real reason was something that I forced myself to forget about because of how sick it made me, how sad it made me, how angry it made me.

I was nine or ten when it happened. I can’t quite tell you who it was that was taking me shopping that day, sometimes I think it was my mom, other times I think it was my dad, or maybe it was my grandparents. I guess it doesn’t really matter because who I was with wasn’t what kept me from entering dressing rooms for years afterwards. It was the two women working in the store that day.

Someone told me once that some memories fade with time, but I remember this clearly as if it happened yesterday. Those feelings still rise up inside me whenever I enter a store, whenever someone glances at me as I browse through clothing.

It went like this: my mom, or dad, or grandparents, handed me an outfit and I was excited. The outfit consisted of khaki pants and a godawful orange shirt that I would rather die than wear today. But as it was, young me had no fashion sense and thought that this outfit was the most beautiful thing to ever grace this planet.

The dressing rooms were on the other side of the store, and I made my way from the kid’s section all the way there with no problem. But I paused on the outside, unsure of whether or not I should just walk inside or let a worker know I was heading in. That pause is what made me turn my head, or maybe it was their heated gazes, but when I turned, I saw them. Two ladies, watching me with what I could only describe as sneers. I remember my head jerking back in surprise before turning to walk into the dressing rooms, my mind whirling with confusion.

Why would they be staring at me like that? I thought to myself, as I began to change into that orange shirt. Did I do something wrong?

I worried about it for a couple minutes, but when I pulled up those khaki pants, those thoughts faded away and then I was beaming at the mirror. I took the clothes off quickly after that, dead set on getting them to whoever was with me so they could buy them. I threw my regular clothes on swiftly after that, and just as I was turning the corner, pulling my hair out of my shirt, I had to skid to a stop. The two ladies who had been halfway across the store sneering at me were right there.

Their eyes scanned me up and down, not even pausing in their conversation to each other as they did so. I stood there panicked, confused. And then it hit me all at once as I saw one of the women roll her eyes and begin to walk back to where they had been standing earlier: they thought I was stealing.

As they walked away, my stomach tightened, my hands shook, and my face felt as if it was on fire. And that feeling I couldn’t quite name encompassed my whole body…I felt dirty.

I didn’t leave the store with an outfit that day. I laid it down on a random shelf and walked away, that feeling still gnawing at me.

I always wondered why those women had stared at me so viscously. Was it because I was tall for my age? Did that make me look older? Or was it because of how I had paused right before going into that dressing room? Or was it the fact that I was brown and anyone resembling that color was to be regarded as suspicious?

Sometimes I still wonder, but that memory no longer makes me sick with anger, or embarrassment, or shame. In fact, when I think of that memory now, it only makes me sad. Sad that a ten-year-old girl carried this memory with her for so long, sad that those two women decided to take their prejudices, whatever they were, out on that same ten-year-old girl who just wanted to get a new outfit.

As our society changes and becomes increasingly complex, now is the time to imagine what sort of future we need and exactly what we need to do to get there. END_OF_DOCUMENT_TOKEN_TO_BE_REPLACED