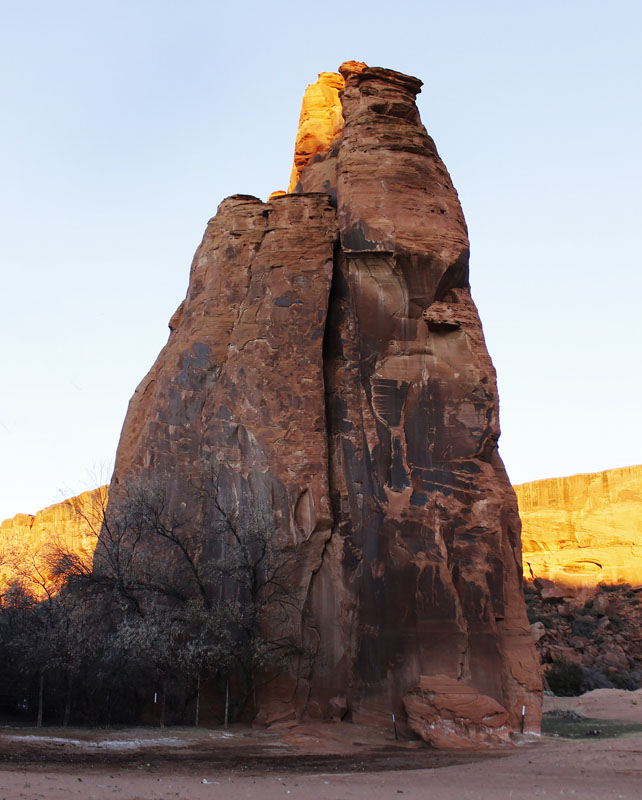 I awoke in sweat. When I opened my eyes, I felt like I was still dreaming. For a moment, I’d forgotten where I was. “get up, my child,” I heard my grandma say in Navajo. I closed my eyes again, trying to get in another minute of sleep before another hot summer day.

“My child, you need to get up.” She was persistent this time.

I sat up in my sheep skin bed on the floor. I rubbed my eyes. They were still heavy. I found my glasses on the table by the only other window in the hogan. We didn’t have much. Just an oven, a cabinet that held dry and canned food, a dresser, table and chairs, a bed, and a small couch. We had the essentials to survive. No vehicle, no running water, and no electricity.

Grandma was making tortillas on the stove that connected to a small propane tank right outside by the water barrels. I brought the spam and potatoes over to the table and made a burrito. We didn’t use dishes much, only when we had soup or company. It was now 6:30 am, usually around the time it was starting to get hot. And since the door faced the east, the sunlight beamed through like the sun itself was barging in.

After we finished eating breakfast, I found my shoes almost in the same place, by the couch. grandma cursed them whenever I left them by the doorway. They were old Converse sneakers, so I didn’t care for them like I did when I first got them last year.

As I walked towards the sheep corral, I could hear grandma behind me, “Pubby, pubby, pubby!” as she fed the sheep dogs their breakfast. It was cute when she spoke in English. Although she knew very few words, she knew how to say things like pop, Burger King, and Max, my name.

I unhooked the lock on the gate, and the sheep complained to me to let them out. “Wait,” I said to them. It was a little lonely at times, even though my Uncle Jimmy took us to town sometimes. So I liked to talk to the sheep like they understood me.

Grandma was already weaving when I got back. She was listening to KTNN, an AM radio station that broadcasted in the Navajo language, and played Navajo tribal music and Native American Church (NAC) music. She didn’t look up once she started—only took breaks to drink coffee, or when she made a mistake. Selling rugs was how she provided for us. She had Supplemental Security Income checks but she saved most of the money so that she could get me a truck of my own when I finished high school the next year. It made her sad, but I reassured her that I wasn’t leaving.

Later that day, I left in a hurry to bring back the sheep. I liked being alone and away from the static NAC and country music that played on the radio. I liked being under a tree somewhere reading books. I liked standing at the edge of the red mesa, as the wind blew through me. I felt alive. like I could fly. Even for just a moment, it felt like I was going somewhere.

And sometimes I thought of her. When I thought about her, my mother, it wasn’t fun-loving memories; though I wish she was here to create new ones. Except I had this game where I made them up so it felt like I actually had a mom. Sometimes I hated thinking of her. Yet her nonexistent memory clings on to me as if she can’t let go. She was the one who left. She left me in this place. In this heat.

If only grandma knew the real reason why I was so eager to bring back the sheep. To be alone out here, rather than spend time with her in the hogan while she sang along to the radio. It was something I knew she wouldn’t understand. She was the one who told my mom to let me stay. She told her she could raise me. To be the mom her daughter could never be. And willingly my mom left. Without a trace, she left in the middle of the night.

Grandma told me this years later. I knew it made her sad so I never brought it up again. It was like this unspoken secret we kept between each other. Something to think about when we were alone.

I did everything I could to make my grandma happy. Because I felt like I owed her. To be the person she wants me to be. The grandson she’s been raising since the age of two.

But today felt like it was time. Time to move on. To live a life I was meant to have. There, at the bottom of this red mesa, in the hogan I was raised in.

I stood at the edge of the mesa for what seemed like the last time. Hoping the wind would cool me off from the blistering heat. I was wrong. Even the wind was just as hot today. I cursed at it. I told the wind to be better or not be wind at all. I yelled. My echo traveled, making it feel like I wasn’t alone.

I fell to my knees and clenched my hands into the red sand. Begging our Creator to forgive my hatred thoughts. “Take this pain away,” I told him. I closed my eyes, listening to the wind whisper in my ears that it was going to be ok.

Then there she was at the bottom of the mesa, calling to me. My grandma was bringing me water and snacks for my travels to bring home the sheep.

I kissed her goodbye and she patted my head. I looked back once more. Remembering her face. Every line and crinkle in her beautiful face.

Friendships and connections are important, but accepting the help and guidance of people who have gone where we want to go is invaluable. END_OF_DOCUMENT_TOKEN_TO_BE_REPLACED

Sometimes our various responsibilities pile up, forcing us to go that extra mile to achieve our goals. END_OF_DOCUMENT_TOKEN_TO_BE_REPLACED

In her farewell blog post for TCJStudent.org, IAIA student Scarlett Cortez reflects back on the past year and what it means to share your lived experiences with others. END_OF_DOCUMENT_TOKEN_TO_BE_REPLACED