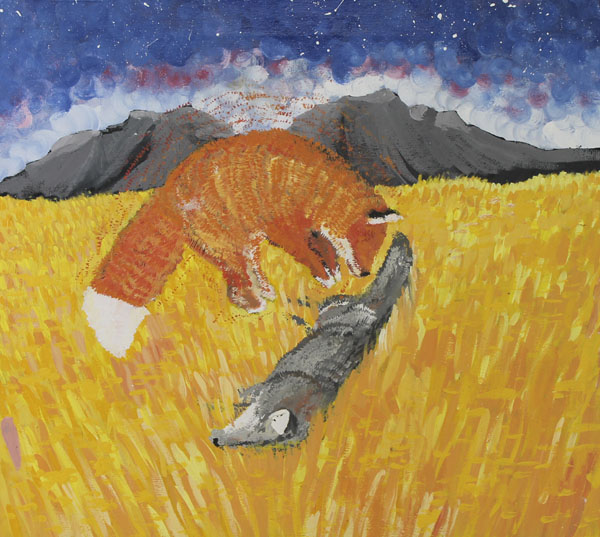 To a young teenage girl, the last ten minutes of school on a Friday take a billion years. I tried to listen to the teacher, but my mind kept wandering. I always get really anxious to get home and pack when I know Grandpa and Uncle will be waiting when I get there. Oh, how I love it that Grandpa comes to get me for the weekends!

Grandpa is in his seventies and although Uncle drives him around, he’s still very active in spreading his knowledge with whoever would like to learn a little about Native American culture. We travel around the Great Lake states giving presentations, going to powwows, or gatherings. I’ve been to every state around the lakes and Canada with these two. Not only do I get to travel, but I learn so much from my Grandpa; he’s like a fountain of knowledge.

I live in Detroit, Michigan, and Grandpa and Uncle come from a small reservation up North. I love to get out of the city and back to nature where I can run around without feeling scared, as my friends and I walk all over the rez. If you see an unfamiliar vehicle, you know everybody is trying to figure out who it is because the only people around are either family or people who have known your family your whole life.

After what seemed like another billion years on the bus, I was happy to see the little green station wagon parked at the curb in front of the house. Mom, Uncle, and Grandpa were drinking cold tea on the porch waiting for me. “Aanii Grandpa! Aanii Uncle! I’ll be right out; I just have to grab my bag.” I threw my book bag on my bed, grabbed my travel bag and headed back to the porch.

“Are you ready?” Grandpa asked.

We arrived at Grandpa’s house around five-thirty, which gave me enough time to visit with Grandmother, before the six o’clock news came on. Those two always watch the news, which gave me the opportunity to head down the road to visit with family and friends. As long as I am home before dark, and not in trouble, Grandpa and Grandma let me go hang out.

On my way to the ball field, I ran into my cousins Lisa and Rhonda who said there was a kickball game going on if I wanted to play. We jumped right in and ended up playing three games. As soon as one was over, we’d have another group of people that either had to go or was just getting there and wanted to play, so we’d start another game. We were having so much fun that we just kept hopping on another team until we noticed it was starting to get dark. I had to walk the farthest back home, so I asked Lisa and Rhonda if they were ready to leave. They wanted to finish, so I told them I’d see them tomorrow.

“Hey Sue! Don’t take the trail home, go the long way. There have been fox sightings around, don’t want you getting ate up over the weekend!”

“Are you for real? I have to get home; Grandma will send Uncle out looking for me.”

I was not sure if she was serious, but I had no time to argue. I had a couple of miles to jog if I was going to get home on time. As I reached the trail, which would save me some time, I decided to take it. I figured Rhonda was just trying to scare me. I had just started down the trail when I thought I heard something following me, I looked back but no one was there.

I wish the path was straight and not all twisty so I could see farther. As I turned the next bend, I saw something red cross the trail in front of me. Oh No! Rhonda was telling the truth, it is a fox! I was by a tree, so I scrambled up fast!

As I was sitting there catching my breath, I thought I could hear movement off to the left of me. The fox was trying to stuff a rabbit carcass under a fallen tree. I thought I heard little yelps, and sure enough, there were two little baby foxes already trying to tear pieces off. I guess they were too impatient to wait for their mother to get it in the den.

I don’t know how long I sat in that tree, but I could no longer see the fox. I think they were full and sleeping, but I was too scared to get down. I was certain that if I did, the fox would hunt me down for breakfast. I knew I could not out run her, so there I sat until I heard Uncle slowly cruising around the bend on his four-wheeler. “Uncle!” I yelled, “I’m up here. Be careful, the fox is over there and she has two babies!”

Uncle shined his flashlight up into the tree. “She’s more scared of you than you are of her, now get down here! You got Grandma all in a tizzy thinking you are laying out here being mauled by that fox!”

As we came cruising into the yard, Grandma came out to the porch to make sure I was okay and then scolded me for not listening to Rhonda’s warning.

“You need to remember that you are not in the city anymore, we have wild animals out here.”

“I know, I’m sorry Grandma, I’ll be more careful and cautious. I just never thought I would get in that sort of danger here on the rez.”

“Danger comes in many forms; the city just has different ones than the rez. Now go get a shower, I have some soup and fry bread warming up.”

Carla Bennett is a Saginaw Chippewa tribal member from Mount Pleasant, Michigan. She is currently a student at Saginaw Chippewa Tribal College, working towards an associate’s degree in Native American studies. Bennett has held various jobs in her 40-plus years, but says, “I feel as though I am heading in the right direction; a direction which will open new doors for me.”

Even in the midst of a pandemic, there is a future that’s worth planning for and looking forward to—and it’s on us to make that the best future we can. END_OF_DOCUMENT_TOKEN_TO_BE_REPLACED

Sometimes our various responsibilities pile up, forcing us to go that extra mile to achieve our goals. END_OF_DOCUMENT_TOKEN_TO_BE_REPLACED

In her farewell blog post for TCJStudent.org, IAIA student Scarlett Cortez reflects back on the past year and what it means to share your lived experiences with others. END_OF_DOCUMENT_TOKEN_TO_BE_REPLACED