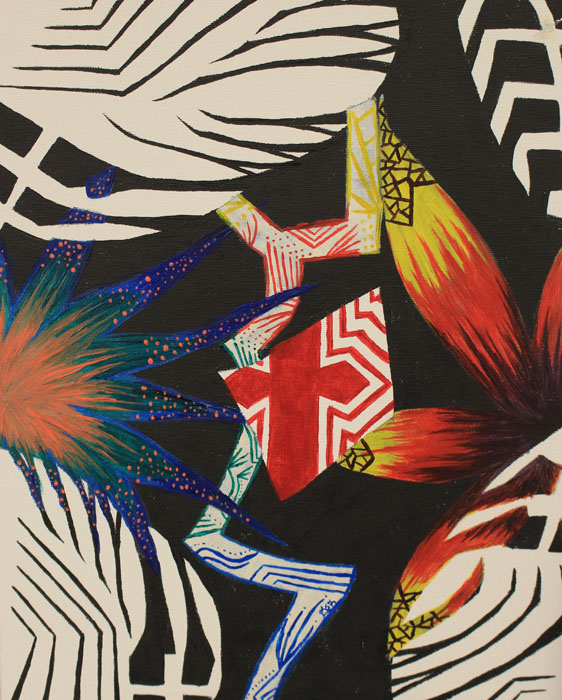 “Really.” There was a condescending smile in Rorie’s voice as she leaned over and examined the drop of blood welling on Lena’s finger. “Be more careful, or just use the gloves.”

A soft but frigid breeze blew around the both of them, rustling brunette and silver hair alike. Right now, Rorie’s silver strands had been cast in a shimmery orange hue from the sun. Such a sight. Insignificant as it might have been, it was a beautiful one, and a welcome one. It certainly complimented the atmosphere.

While her breath made white wisps of vapor in the air and her cotton pants became soaked through with cold rainwater around the knees, Lena noted that everything seemed to be lovely that morning. The sky, painted lavender, pink, and a rich, stunning orange held no clouds and the promise of blue skies later in the day. The scent of freshly pulled earth and mulch was thick in the misty air. It was like the natural world was trying to be extra wonderful today, of all days—to spite or comfort her, she didn’t know.

Lena only nodded to her friend and then wiped the injured appendage off on her leggings. With tired effort and a little more care, she finished pulling the last of the weeds from the ground. It seemed like every tall and unsightly plant known to the area was gathered around her uncle’s grave—and she wondered offhandedly if this was some snide means the universe was using to try and guilt her into visiting more often. If it was, it certainly wasn’t working. Her fingers were so cold she could hardly move them anymore.

“Finally, damn.” Lena leaned back, feeling the earth squelch unpleasantly under her knees and the toes of her shoes. “That was almost more trouble than it was worth.”

“Well, you did clear five graves,” Rorie hummed in amusement. “I told you to wear the gloves.”

Lena could only huff as the pair made their way back to the front steps of the chapel. The girl with the brunette hair hauled the surprisingly heavy bag of creeping thistles and those annoying, prickly, flat plants that loved to grow in inconvenient places. As the two girls sat down on the crumbly steps of the old chapel, they eyed the equally decaying graveyard (“boneyard,” some dark and juvenile part of her whispered. She smirked, remembering using that crude term a lot as a child).

“Did I miss a joke?” Rorie chimed in from beside her, smiling and holding up the lone solar light that had remained at her uncle’s gravesite. It was dented in some places, and the thin plastic protecting the bulb had been broken. Shaking her head in answer to the silent question, Lena watched as Rorie tossed the broken pieces into the garbage bag.

“Just thinking about when I was a kid,” Lena answered, straightening upright with a groan. “I’ve only come here twice, but this place has always looked the same. Except this time, more things are broken.”

“Yeah, you can never find peace around here,” Rorie pondered, gazing around the untidy grounds idly. “Nothing can stay nice. Nothing’s respected anymore.”

Not the old chapel, with its free-swinging doors and cracked, cloudy windows. Not even the graves of the dead, Lena thought darkly, unable to forget or move past what she had found lying scattered in the weeds. She cast a brown-eyed glance at the small pile of brown glass sitting on the church steps. Another mostly-intact bottle sat next to it and Lena wanted to smash that too.

In her mind, some sick part of her was grinning like crazy, her anger a sinister beast in a cage. It’s visage painted an ugly, rusty red, knowing while it couldn’t get past the bars, it could still inflict pain…though such a person as Lena would never let it. So there it sat, slighted like a sentient being and painful like a poison, looming heavily just above her gut and in between her lungs where it could do no harm.

It didn’t help soothe her that she would have to meet with family in just a short while—family that she hadn’t spoken to in years, people that would look at her with sympathy and teary eyes. While she knew she should (and would) go and give hugs and attempt smiles, she just couldn’t bring herself to care. Lena knew they would whisper about her if she didn’t go, but personally (and in vulgar terminology) she didn’t give two fucks about any of it. Funerals were for the living after all…And although she supposed it was only to be expected, the presence of beer bottles at her late uncle’s grave did it’s very best to irk her, tugging at her heartstrings, trying to goad her into feeling something. The shards were as meaningful as if someone spat upon his memory.

Sighing, Lena looked over at where Rorie was sitting uncomfortably on the cold steps, absently rubbing her slightly protruding belly. It was still odd, even after five months, to see her best friend with another person growing inside her. There weren’t two people in the graveyard, there were three. So odd.

Smiling tiredly, Lena thought she could care about Rorie…and one day she was sure she’d come to love her baby too. It was a bit of cosmic mercy in the midst of hell.

“Let’s go, you’re shivering.” Lena stood up and helped the other teen up from the steps. Stumbling, Lena allowed herself a moment for her dizzy head to clear before she helped her silver-haired friend with the trash bags.

Patting her lightly bandaged head and giving her neck a careful stretch, she tried to settle down inside Rorie’s four-door. Now, at this procession she would go through even more pitying looks than the year before. Lena’s own car had been the one her older sister crashed into earlier that month.

Alyza Grant is a student at Turtle Mountain Community College.

As our society changes and becomes increasingly complex, now is the time to imagine what sort of future we need and exactly what we need to do to get there. END_OF_DOCUMENT_TOKEN_TO_BE_REPLACED