Home » Between the Canyon Walls

Between the Canyon Walls 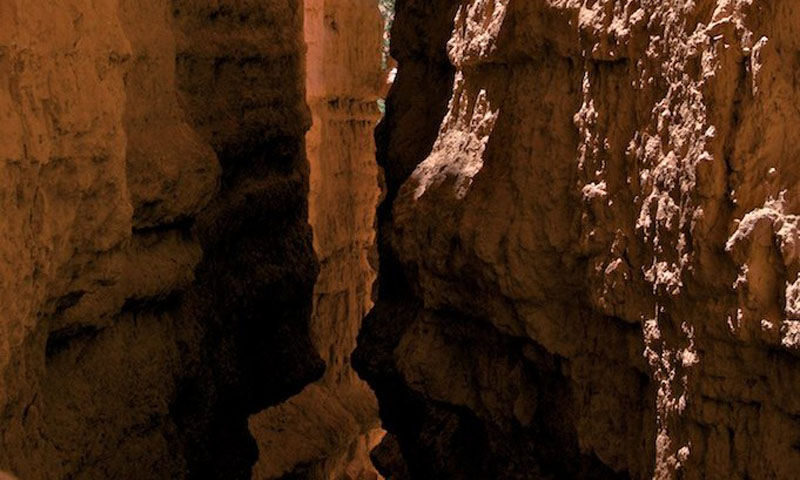 Home could be found effortlessly as if my mother pointed a beacon towards the sky to guide us. our summer escapes came in the form of canyon exploration and creek swimming. Possible dangers came from the occasional stranger, a snake on the trail, or the mountain lion cries in the distance. Getting lost in the reservation’s valleys, creeks, and mountain paths never set off any alarm bells in our head because the trees and water embraced us as a parent would a child returning home. Losing our bearings or getting in too deep over our heads did not happen, as we used the common sense our father drilled into our heads. The day we finally felt any real anxiety and panic in the pit of our stomachs showed its face, no different than any other sweltering summer day.

My brother Josh’s charms could have any “rez” girl swooning over his long eyelashes, dimpled cheeks, and slick jet-black hair that always looked a deep purple in direct sunlight. Despite being younger than me, he self-proclaimed the position as leader of the four of us. My decently long and tanned legs made the daily expeditions possible while my hair became the victim of the wind, creating the constant state of knots and tangles my mother called a “bird’s nest.” Being the mirror image of my father, Jeff came with chubby cheeks and a round face, as he thoroughly loved my mother’s cooking. Having been only six at the time, my brother Jacob always tried to move his little legs quicker to keep pace. The mole on his face always shifting as he pursed his lips with deep concentration any time he carefully leaped from rock to rock.

The sun loved to burn any exposed skin to be peeled off slowly later, but the cold creek’s water became our sought-out salvation. Yelling nonsensical songs as we walked, “We’re going into the woods today and we’re going to find some…bear…poop…” The canyon threw around our voices as the laughter from our bellies filled its openly empty space. Disturbing any bugs seeking a haven in the tall grass, we stomped with fierce determination through the thick vegetation of the canyon floor. Surveying the rich rust-colored walls for any sign of movement became frequent practice. The swimming spot could be found around several bends, across two creek intersections, and below the perfectly pointed rock ledge used to achieve superb cannonballs.

At last, our salvation revealed itself as we threw aside our possessions absent mindedly in the excitement of becoming guppies. Jumping into the creek caused your body to acclimate quickly to the frigid water below, but Josh was alone in this endeavor, as the rest of us took our time entering the waters. We accepted the smell of algae, as the water pricked needles against our skin, but finally the sun could no longer be a bother. The water shifted to accommodate the diving in and out, jumping off the ledge, doggy paddling of four “rez” kids acting as if we occupied an Olympic-sized swimming pool. feeling the winds change and a slight overcast coming on, we decided the time for mom’s cooking couldn’t come any sooner.

Forcing our fatigued muscles to move onward home, we sluggishly navigated through the familiar canyon path, the walls giving us shade from the sun we wished could shine down upon our damp shivering bodies. Interrupting our synchronous movement, my brother Josh stopped and turned around with urgency written across his face. “Run” boomed out of his mouth with unquestionable seriousness as the three of us shifted our legs to match the direction of his. Throwing Jacob onto my back, as we all knew he wouldn’t be able to move his legs quick enough, I braced myself for the impact of any threat coming. Leaving the canyon floor, we swiftly grabbed rock after rock, unsure of the exact reason for the climb as globs of rain started to obscure our vision. The canyon wall opened to reveal a cave perfect for the refuge from the relentless rainfall.

Wishing for the warm embrace of a fire’s flames, we finally became aware of the reason behind Josh’s anxiety as we looked below to the once occupied canyon floor. Replaced with muddy brown water, the well-imprinted path from multiple creek visits could no longer be seen. fighting for space, brown sludgy water, pushed downstream, taking every log hostage as they bobbed hopelessly against the current. Thunder cracked in our ears and dark blackened clouds poured down rain as we huddled together for warmth. Watching from the security of the cave, we felt lucky for the “Spidey Sense” my brother Josh happened to have in the moments before the water’s rising surface.

After the time lapse of eternity, we could see the path home return with the water’s dirty business coming to a close. As if no life-altering, near-death experience happened, the cloud parted ways and the water regained its clear calm flow. A scared Jacob who had been gathering my shirt in his fists as a sort of security blanket finally left my lap to stand at the lip of the cave. As we gathered to stand beside him, we understood how quickly nature could change its mood. on the journey home, the canyon captured our laughter as it smiled down on us, knowing our return would come soon enough.