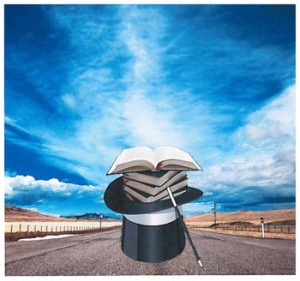 The best writing instills a sense of urgency that compels readers forward. An engaging author builds anticipation, adds unexpected twists, and challenges assumptions. Reading a captivating story draws writers to their craft, and by dissecting how an author hooks us, we can better appreciate how these verbal magicians create their absorbing works—and learn how to hook readers ourselves.

What propels good writing to greatness is the ability to build suspense. Decorated Abenaki storyteller Joseph Bruchac uses his content development to keep readers guessing, by slowly revealing the complexity of his stories throughout his work. Bruchac is a master of foreshadowing, and when I asked him about it he said, “One approach that I often take to capture my audience is to begin with a sentence or a line that is a hook—something that will make them want to keep reading to findout what happens next.” To prove his point, he made up an example on the spot and stated that a first person narrator could say, “They never listened to me. But they were sorry about that later—thefew of them who survived.”

Poetry can be equally attention-grabbing. During the Renaissance the term volta—the Italian word for twist—came to describe surprise endings. Whereas the sonnets of the past often described an idea three different ways before building to their twist, modern poems need only to spin an entrancing story before pulling the rug out from under us. In his poem “No Pie,” Mark Turcotte (Turtle Mountain Chippewa) describes a mother and young son heading off the reservation to purchase a slice of pie in the neighboring town. The waitress at the diner first ignored them, then glared at them, and finally refused to sell the pies by the piece. They couldn’t afford a whole pie, and in the final lines the narrator illuminates the unspoken racism directed at him as he compared his mother’s “pearl white” skin to his own “brown” skin as both of their mouths “filled with tears.”

Master storytellers have been using such tactics for centuries. The reason William Shakespeare’s Hamlet still entrances audiences over 400 years after its first staging lies in the way The Bard developed the plot. In the first scene, the late king’s ghost walks the castle at night, but it isn’t until four scenes later that the ghost speaks to tell his son of his murder. The three scenes in between build the tension for the audience, thereby giving Shakespeare an attentive ear for his revelation about the king’s death at the hand of his now-reigning brother. Hamlet is celebrated for, amongst other things, its beautiful prose. It has also had a profound influence on generations of readers, including Dr. Sigmund Freud, and, more recently, Disney, which borrowed the plot for the acclaimed film and musical, The Lion King. Yet before it became influential, its plot points had to first be enthralling.

And “enthralling” is how I’d describe Steven Brill’s 2013 article “Bitter Pill”—it’s the best non-fiction essay I’ve read in recent years, which has more to do with content development than with topic. The piece illuminates the fact that most of our nation has been locked into a debate about whether individuals, employers, or the government should be paying for our healthcare, but few amongst us are questioning why it costs so much. Brill uses real patients’ stories to highlight that hospital markups can run as much as 10,000% above cost for things like acetaminophen, and that in alarming cases these inflated charges leave even insured people bankrupt. Although this fact is startling enough, he uses his content development to introduce justifications for the overcharging.

A case in point is when Brill quotes Steven Safyer, chief executive of the largest nonprofit hospital in the Bronx, as saying, “There is no such thing as a cut to a provider that isn’t a cut to a beneficiary…this is not crying wolf.” Brill responds, “Actually, Safyer is crying wolf to the tune of $196.8 million, according to the hospital’s [2010] tax return. With $2.586 billion in revenue—of which 99.4% came from patient bills…Safyer’s business is more than six times as large as…the New York Yankees.” Brill then goes on to suggest that Safyer could cut his own salary ($4,065,000) and that of other multimillion-dollar employees “without cutting services to beneficiaries.” Brill’s frequent rebuttals throughout the piece show his proficiency in using his content development for combat, and by doing so his article reads less like an informative essay and more like an indictment.

We love magicians because they perform amazing feats before our eyes, and by dissecting their tricks we can learn new ways to captivate our own audiences. Sherman Alexie (Spokane/Coeur d’Alene) says his best piece of writing advice is “read as many books as possible.” As a bibliophile and communication educator, I enthusiastically agree. Writers can certainly learn much about craft in a classroom. Yet when we analyze the magic contained in great writing, we let every page teach us to hone our own voices into ones that keep readers reading.

Crispin, J. (2014). A Conversation with Sherman Alexie. Retrieved from http://www.bookslut.com/features/0203/alexie.htm

Ryan Winn teaches English, theater, and communications at College of Menominee Nation in Keshena, Wisconsin, where he also serves as the Humanities Department Chair. He gratefully acknowledges the conversation he had with Joseph Bruchac in January 2014, which contributed to this essay.