Fighting: A Workshop on Erasure 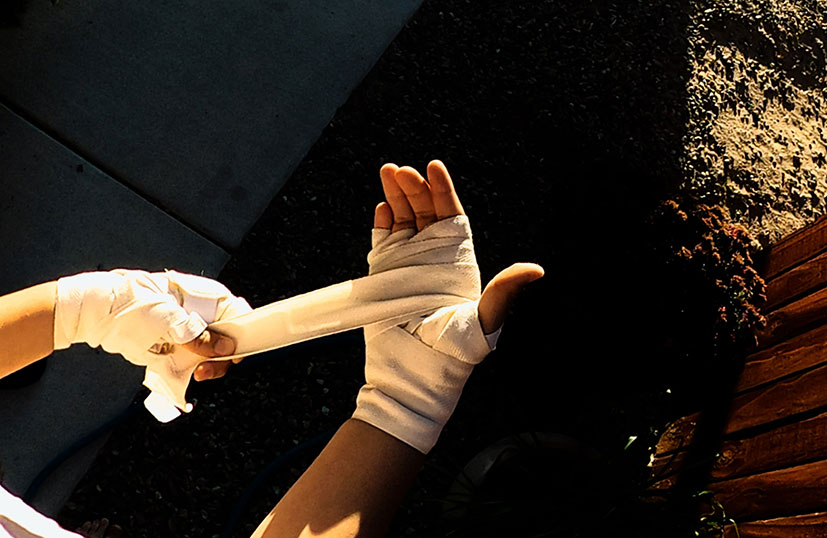 “Alright,” Ellie Mescal, a visiting poet, said from the glow of her little camera. “Does anybody know what erasure poetry is?” She looked across the row of students glowing back at her, but none of us dared to unmute for a hurried guess. She slipped a small, understanding smile before continuing.

“Well,” she taught, “unlike what we’ve seen so far, erasure works with what already exists.”

With her mouse, she flickered through a series of images. First, we saw how to transform stoic letters into inky, black figures slurred drunkenly across the page. Cut up collages of the alphabet jumbled into one stuttering mass. Now, we saw stark black marker lines zigzagging across book pages, blacking out everything until something new grew in the white spaces between them.

Ellie Mescal turned to us once again, repeating phrases like erasure and play with the space and it’s easy enough for you guys to try, too. Her head bobbed through the lecture; her wide, crooked glasses bouncing along the edge of her nose as she went on. She wore her buzzed brunette hair bluntly, hugging her ears, and her voice dripped low, like she’d been entrusting us with the secrets of erasure all along.

Sitting there, trapped in my own little bubble, I couldn’t help but think of the irony of being taught erasure. Of course it’s easy enough for us to try, I wanted to say into the muted microphone. Haven’t we practiced erasure our whole lives? Still, I was enamored by the idea of creating something new out of the concrete and tangible.

She read us her erasure poems conjured from interviews, biographies, and articles of boxing champions across history. Jabs interjected the white space from dark slashes. Uppercuts appeared in slow motion from thin air. The word freedom punctured the page in a flurry of punches that took my breath away.

Maybe it was because the word erasure hit too closely, feeling less like poetry and a little more like poison. Maybe it’s because she wrote about long-dead boxers and their wives, fighting to taste freedom another knock-out away. Maybe it’s because her poems had a way of blacking out the words on a page until it took the shape of you, boxing dreams and all, still so far from reach.

I don’t know why I printed out her poems, carried them to you, and read them with the same pain I felt when I first found them. Only that I thought you would see all the ways boxing and love knocked us off our feet. Still, as my voice swallowed the word freedom, I saw your eyebrows stitch together, gutted.

“One quick round?” You asked, a fire building fast in the underbrush of your breath. I nodded, grabbing the mitts, and together we listened to your gloved fists cutting the air in quick swishes, each hit thudding into me what we both felt but didn’t say: we are still here.