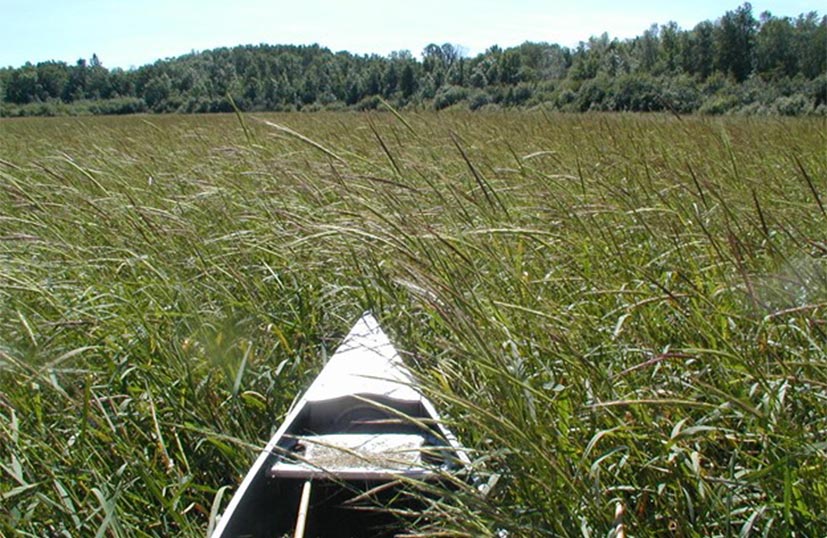 A long time ago, my ancestors lived on the eastern shores of Turtle Island. They were visited by seven prophets, who shared seven prophesies, which we call the seven fires. These prophesies foretold the coming of the light-skinned people across the great water and warned the Anishinabek peoples that they must migrate west to survive. The people were told that we would know of our new homelands when we found the place “where food grows on water.” This referred to mnomen, or wild rice.

Mnomen means “good berry,” and it became a staple food for the tribes living in the Great Lakes region prior to and following European contact. There are still many Anishinabek people and families participating in the same traditional harvests of mnomen today, along the lakes and rivers of the Great Lakes region. For my direct ancestors, however, the various treaties and forced removals meant that they no longer had access to those lands. My fourth great-grandmother was eight years old when the second treaty of Chicago was signed by her elders under duress in 1833. The treaty ceded five million acres of Anishinabek lands to the United States, in exchange for a reserve of equal size, location to be determined. Like so many treaties signed by so many of our ancestors under duress, that reserve never materialized. Instead, the Anishinabek scattered. Some went north to find refuge in the forests. Others attempted to negotiate the new reserve, and another group settled into a new camp around Council Bluffs, Iowa. Five years later, resistors to the onslaught of European settlement were forcefully removed over six hundred miles from camps in Illinois to a reserve in Kansas. After a time, that reserve was also under threat, and some of the Bodewadmik families chose to accept allotment lands in Oklahoma, hoping that it would be a way out of more removals. My fourth great-grandmother was one of them, and at age 62 made the last migration journey of her life from the Potawatomi reservation in northeast Kansas to her allotment parcel in central Oklahoma. She was no longer in a place “where the food grows on water.”

We know that our ancestors made difficult decisions in impossible circumstances in order to survive. And we know that these removals broke the long-standing relationships that we’ve had with our homelands for thousands of years. Because our land is the literal foundation of our culture, the implications of removal are far-reaching and include everything about our knowledge systems, intergenerational transmission of that knowledge, and every aspect of how we live our lives today. I do not harvest mnomen as my ancestors did. I don’t know how, and I now live in the unceded territory of the Clatsop and Chinook peoples, Salmon nations thousands of miles from the bones of my ancestors, in a place where mnomen doesn’t grow.

In the book, For Indigenous Eyes Only, A Decolonization Handbook, contributor Waziyatawin (Wahpetunwan Dakota), explains how our traditional diets of foods such as mnomen, wild game, and other plants and medicines that were collected, harvested, hunted, and cultivated by Indigenous peoples, are vital for our well-being. They also provide strategies for changing the Western diets forced upon us by removals, boarding schools, and lack of access to traditional lands. This includes learning about our traditional foods from elders and teachers, increasing our access to original foods (whether buying them, growing them, or finding ways to harvest them), and sharing them with others. I appreciate how they close the chapter with these words:

“Our well-being is connected to the well-being of the land and all of it is inhabitants. When we devote our time and energy to understanding those rhythms and cycles, we are closer to truly understanding who we are as Indigenous Peoples. The decolonization of our diets is thus linked to other forms of decolonization that will help us physically, culturally, psychologically, and spiritually. We have nothing to lose by decolonizing our diets and so much to gain. Let us all work on healing and helping ourselves through the recovery of our traditional foods and lifestyles.”

My own work on this aspect of decolonization has been years in the making. I’ve planted many gardens, converting whole swaths of suburban lawns to food-growing mini-farms. I’ve raised chickens and rabbits for food and even taught others how to grow, raise, and preserve food and make plant medicines. Over time, I’ve found various resources for understanding the traditional foods of the Neshnabek people. As I reconnect more with our culture and history, the desire to learn and practice these ways of eating only grows. I hope that one day I will have the opportunity to participate in a mnomen harvest. In the meantime, I buy hand-harvested wild rice from Native-owned businesses, and am practicing recipes from cookbooks written by Native authors. Last night, I made a delicious batch of “Cadillac Manoomin Louise’s Way,” from the book Original Local by Heid E. Erdrich. In short, you cook one cup of well-rinsed mnomen in three cups of high-quality broth in a heavy pot with a lid. When it is more tender (but before it begins to curl), mix in toasted pine nuts, salt, and pepper, and a drizzle of olive oil. It is absolutely delicious. When I eat mnomen, I do more than nourish my body. I also connect with my Anishinabek ancestors and relatives, especially those striving to keep our original food traditions alive today. I eat with gratitude.

What are the original foods you love to prepare and share? Feel free to post additional resources for connecting once again to our traditional foods.