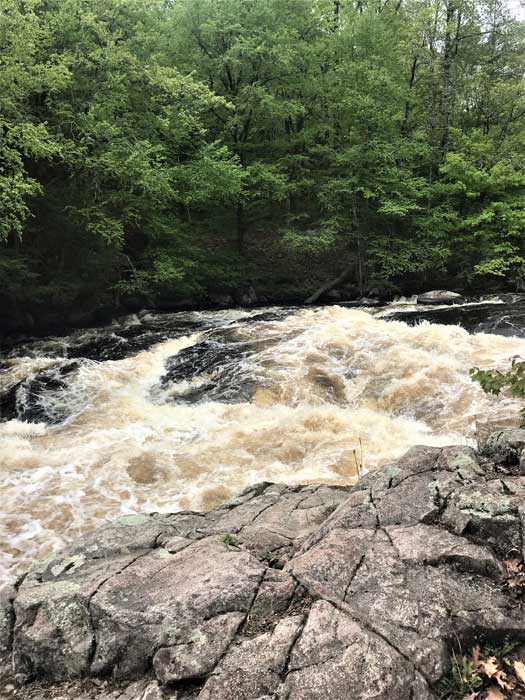 One of the questions that I am frequently asked is how I came to be so passionate about the environment. I can never tell how elaborate of an answer one expects, but it helps that I can trace it back to something physical.

While I have written about the Menominee River that sits at the border of Michigan and Wisconsin—the point of origin for my people and the site of the proposed Back 40 Mine—it is not the Menominee River that I think of when I think of my home. That memory is contained in a winding, wild body of water that is today called the Wolf River. Ever since I can remember, that river has been the defining point of my summer. Thinking about wading into those icy waters on a sweltering summer day is enough to elicit a visible shiver, but splashing around in its powerful current is a feeling like no other. I am so proud of that river that I take people to it and introduce them as though I am bringing a boyfriend home to meet my parents (I am not alone in this—chances are, if you have visited College of Menominee Nation as a group and we knew you were there, somebody has probably taken you to the Wolf River). There is a trail that runs beside it and you can traverse the woodland up to a sort of promontory where you can get a good look at the cliffs and gaze in admiration over one of the river’s wider points. It’s a fun place to go rafting and my family did, often, although it’s also sort of fun to just sit near a particular waterfall and watch people navigate their rafts over it for the first time.

But if there is a recurrent theme that runs through environmental history, it’s this: wherever there’s a beautiful place, whether it’s land or water or some beautiful thing in between, there’s always going to be something buried in it that someone wants to dig up. In the case of the Wolf River, it is zinc-copper ore, condensed in a site north of us near the city of Crandon where the deposits were discovered in the 1970s. The project was taken on by Exxon—yes, that Exxon. After a short while, Exxon withdrew its application, but the project was taken up by a number of the world’s most powerful mining companies. Royal blue stickers that read SAVE THE WOLF RIVER—STOP THE CRANDON MINE were emblazoned on so many surfaces when I would come home from Chicago to visit, including on some things my mother owned, that that particular shade of blue is now my favorite color. Local musicians would sing wistful versions of a John Prine song re-written to place paradise along the Wolf River.

The full story of how the Wolf River was saved is too long and complex to get into here, but I encourage people to read up on it. It is a true David and Goliath story, with lots of very passionate Indigenous folks holding the slingshot, and in this case the rock in the slingshot was Indigenous unity.

The reason that I am bringing this up now is because for most of my life this river has been saved. It has become a symbol to me of what can happen when Indigenous people come together. It is a reminder that the responsibility I have to the land and water is stronger than tribal politics, more valuable than any currency, and longer lasting than ore. It’s the motivation that I have to keep studying—the promise that with the right finesse, these battles can be won. And all through the winter, through the studying and work, I fantasize about the moment I get to jump into those rushing waters again.

And now, some 20 years later, that symbol of all that I hold dear is under threat again.

You can tell how we feel about it in the informational posts about this new project, which is rumored to possibly start drilling as early as March. The hashtag chosen by one local organizer is #SavetheWolfRiverAGAIN. When I found out, I immediately threw my head back and heaved a great sigh. Not this. Not again. But yes, we have to do this. Again. We will walk for the water again. We will show up again. We will write letters again. We will fight again.

I don’t know how this is going to turn out. My heart says that if we come together, we can do anything. The problem is that some days that “if” is a big one. My only hope is that we are in a better position than we were then. We have lots of educated Natives now, who have learned how to harness grassroots action, relationship building, and social media. We have our youth and our elders. We are as formidable as ever. And this is the feeling I try to hold onto, letting it rush over me like the icy cold waters of the river that defined me, awakening my spirit and my strength when I emerge once again.