I Am Nothing Without My Relatives

I think a lot about these terms, the various ways I have identified myself, the vocabulary of ethnic identity, the terms I use in introductions or email signatures or scholarship forms—the credentials of belonging.

The response I get varies depending on whether or not the person is also Native. Often, an introduction requires education: a history lesson accompanied by a political statement about treaties and blood degrees and racialization and why my ancestors made babies with French men; but always answering the sometimes-explicit question of “just-how-much-Indian-are-you?”

When I am with my Citizen Potawatomi relatives, there is nothing more to explain than which family I belong to. Even that can be somewhat complicated, as there are over 40 so-called “founding” families—the people who, after the signing of the treaty of 1861, moved with two-thirds of the Potawatomi living on a reservation in Kansas to individual allotments in Oklahoma—and of those families, I am descended from four of them. They were Potawatomi, but also French, Metis, Kickapoo, Seneca, Odaawa, and Ojibwe. While I can trace my ancestors to written records going back to the 1700s, the realities of ethnic identity, let alone of belonging, are more complex than ancestry. 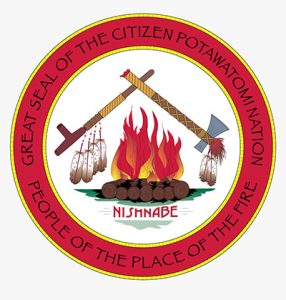 Twenty years ago, I began a concerted effort to reconnect to my Potawatomi culture, for it to mean more to me than simply being enrolled based on ancestry. While that is “enough,” at least in terms of being a citizen of my nation, it is not enough for me to answer the question that drives my learning: What does it mean for me to be Potawatomi today? I learn what I can of my ancestors, but this is inherently limited. I start with names and dates and places. I scour tribal archives for information and wonder how much the picture in my mind matches what was their reality. I have few ways of knowing, threads of information within a cultural context I am piecing together with each new story, every new Bodewadmimwen phrase I learn, every historical artifact I find.

When I am asked “where are you from?” it feels difficult to answer. I live now in Astoria, Oregon, in the homelands of the Clatsop and Chinook people. In the 20 years before that, I lived on the front range of Colorado, in a city with Natives from all over, on the ancestral lands of the Cheyennes, Utes, and Arapahos. I was born in Southwest Kansas, the high plains where the Pawnees, Osages, Comanches, Kiowas, and Kaws once stewarded vast herds of bison. A huge statue of “Buffalo Bill,” one of the most prolific slaughterers of those bison, stands outside my hometown. My Potawatomi grandmother was born in Oklahoma, in the place where her grandfather and great-grandparents migrated onto allotments.

The Potawatomi were removed from the lands around Lake Michigan in several waves beginning in the early 19th century and culminating in the Trail of Death in 1838. But even now, when we talk about our culture and what it means to be Potawatomi today, we talk about a land that many of us no longer have access to (note: there are Potawatomi and other Neshnabek peoples living in those ancestral lands, notably the Forest County, Hannahville, Gun Lake, Nottawaseppi Huron, and Pokagon communities in the United States, along with several First Nations in Canada). I learn stories of sturgeon and sweetgrass, food and other aspects of culture which are rooted in a place I do not domicile. What does it mean to be Indigenous, which literally means to be of a place, if I am no longer in that place? What is “home” when we are living on someone else’s land?

In There, There, Tommy Orange muses on this theme:

“Urban Indians were the generation born in the city. We’ve been moving for a long time, but the land moves with you like memory. An Urban Indian belongs to the city, and cities belong to the earth. Everything here is formed in relation to every other living and nonliving thing from the earth. All our relations. . . . We know the sound of the freeway better than we do rivers, the howl of distant trains better than wolf howls, we know the smell of gas and freshly wet concrete and burned rubber better than we do the smell of cedar or sage or even fry bread—which isn’t traditional, like reservations aren’t traditional, but nothing is original, everything comes from something that came before, which was once nothing. Everything is new and doomed. . . . Being Indian has never been about returning to the land. The land is everywhere or nowhere.”

My uncle was born and died in our hometown, never venturing very far beyond the space he knew as “home.” For much of his life, he lived outside, generally in the same downtown park, and bathed in the early hours before the town awoke on the side of the bank building, spreading his laundry on the bushes to dry in the morning sun. As he was dying from cancer a few years ago, he asked me to make sure things were taken care of for him. He had already made plans to be cremated. I asked him, “What do you want me to do with your ashes?”

“Oh, hell, I dunno,” he said, thinking for a minute. “Scatter them in the park!” he finally said with a laugh. “That’s where I always felt most at home.”

Some of us live in the places where our ancestors are buried. Others carry our ancestors with us. I scattered some of my uncle’s ashes in the park, as he requested. But do you know how many ashes are left after cremating a human body? Too many to hide in the cultivated gardens of a busy urban park. So, we left some in the riverbed, long dry and perhaps never to return. And then, I took him with me to Oregon, following the trail of settlers that came to this place 200 years ago. Now, what remains of my uncle sits on a shelf with other items that are important to me. Sometimes I wonder if it is too strange or somehow disrespectful to keep part of him with me. Maybe I will take what is left to the ocean nearby, a place he never got to see. Maybe I will take some back to Oklahoma, the new homelands of a people still remembering great lakes, to the land where his mother is buried.

Neshnabe is a name my people call ourselves. It is a word that can be interpreted in a few ways. Most basically, it means, “the people.” It comes from old origin stories that refer to the lowering of mankind from the hole in the sky and then placed on the earth. Ojibwe language teacher James Vukelich explains an even deeper meaning—“I am nothing without my relatives.” When I say, Neshnabe ndaw, I mean that I am here because of those who came before and those who are here now. “Everything comes from something that came before, which was once nothing.”