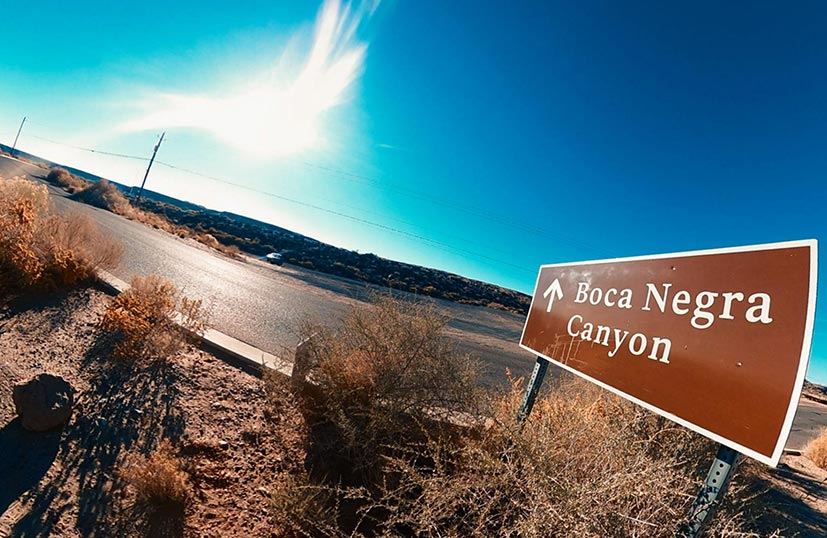 “Welcome,” Alejandro declares with a twist of the steering wheel, “to Boca Negra.” The sudden jerk of his sun-spotted Civic sends dust plumes into the underbrush. Like a tour guide, he begins rattling off names of cactus as we come across their massive, prickly arms. He points at a cluster of huddled green limbs dancing. “There’s jumping cholla. Those over there,” he continues, shifting to the wide bearpaws of another, “are prickly pear, the kind you make jelly from…” he trails off, eyeing me from the lot’s edge.

I can feel his eyes but, instead of studying the plants or stealing glimpses of skittering road-runners, I’m absorbed by the black plateaus swallowing the skyline. You would never guess twenty minutes from Albuquerque, volcanic rock fields shone like glittery, inked gemstones buried in sugary sand. My awe-struck eyes say enough, and Alejandro flashes a wide grin.

“You’ve really never been here?” He asks, his eyes trailing the wingtips of a hawk drawing lazy circles.

“You know my mom never wants a day off and my sister practically shuns the outdoors,” I explain, laughing. “I tried with the soldier I moved here with but…”

Alejandro’s eyes light up with recognition. “Oh, that one,” he teases. “I can imagine how that turned out.”

He was right. In the early days, I meticulously plotted a top-list of to-dos. I imagined treks to the flowery canvases of O’Keefe, binged Breaking Bad, and plotted hikes. When I planned an RV-tour à la Heisenberg, all I remembered was Kris sitting numbly at the television, his eyes glazing under the glow of Halo.

“After such a romantic tryst through the Sandia mountains? I guess you could say I was so wooed he had to leave Albuquerque forever,” I laughed, feeling stung.

Instead, I ran Bosque trails, counting hummingbirds and wondering what cottonwood was when it fell, white as snow, in the middle of summer. I cried at the canals flanking the Rio Grande. I tried finding the trails I plotted, only to get lost in outdated instructions.

“Luckily,” Alejandro says, guiding me effortlessly along, “I grew up here, and know where to find them.” He pauses. “But there’s one thing you should know.”

“You have to be quiet,” he whispers, bringing a hand to his lips. “Or you’ll chase them away.” In the descending twilight, as grasshoppers sprang to lavender stalks, he pointed out squiggles until my eyes made sense of them. Children’s handprints ghosting over rockfaces. Turkey feathers fanning from crevasses. Snake silhouettes slithering over ledges. Bird beaks pointing forever skyward. Because I’d been so busy recounting all that went wrong, I didn’t realize we were in their midst until we were submerged at their core, waiting for them to be seen. Maybe it was better, then, to be caught off-guard by Boca Negra’s beauty, in order to be swallowed by the canyon completely.