↓ Skip to Main Content
Home › Blogs › Into the Black 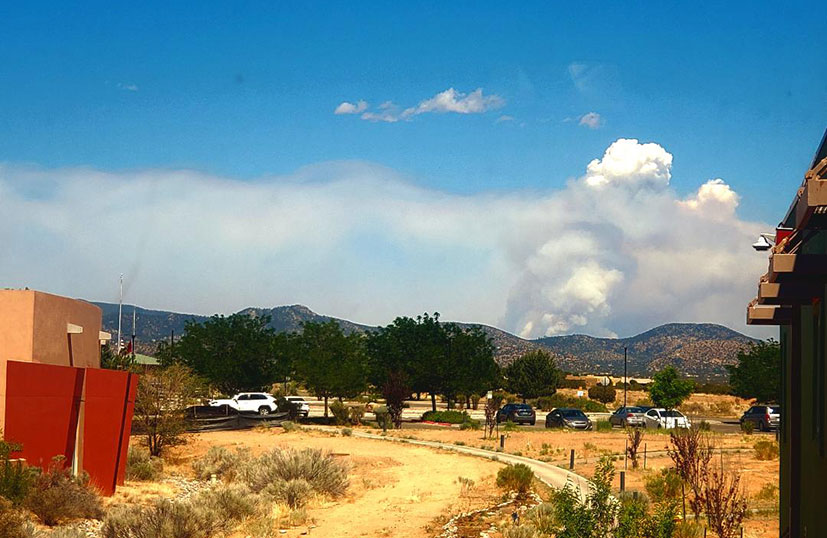 When Mark first guided me to the fire-tower, I was afraid of what I was going to see at first. The news aired whole montages of animals abandoned by fire; baby deer curled by burnt logs, their tiny noses smudged in ash, too tired to run. When the fires began, my poetry teacher stared into the blank dry-erase board, somewhere else. I was doing fine until I realized the ashes are burning animals, he mumbled so simply, letting it hang in the stinging air.

With each rung, I thought of each animal that flickered on screen. Had Mark not been waiting to ascend, I don’t think I could’ve climbed at all. Though he’d only been my coworker for a smattering of weeks, I learned how firefighting bled through his life. His knees trembled, nearly destroyed from the forty pounds of equipment firefighters heaved into the forest. He grew exhilarated at the smell of campfire hanging heavy in a smokeless sky knowing that, somewhere, yellow jackets ghosted headfirst into it.

“See anything, yet?” Mark called, startling me.

With a sharp breath, I clambered onto the platform. A heartbeat later, Mark appeared, scanning the horizon. He held the upturned eyes of his Alaskan tribe, so outside of his element, yet embracing the hot breath of summer like he was always meant to land here. He glanced at me, catching the fear worrying my mouth into knots.

“Where you from again?” He asked.

“North Carolina,” I answered. “Hurricanes, tropical storms, you know, the opposite of everything here.”

“I get it,” he answered, fixing his crooked glasses. He eyed the towering plumes of cauliflower shrouds in the distance, how we watched them metastasizing all afternoon.

“If you’re surrounded by fire, you know where to go?”

“…Get to higher ground?” I answered, my Carolinian mind painting mile-high beach waves and downed power lines. He laughed, shaking his head.

“You wanna get to land that’s already burned.”

He explained how African tribes would send runners through grassland, sticks of fire in their palms lighting an outline for controlled burns. That, instead of returning home, they would trace the fire-path to the beginning, re-settling in a land transformed.

I tucked my chin in my hand, curious.

“You have to work backwards?” I asked.

“We called it getting into the black,” he shrugged. “It’s the safest place in a wildfire.”

I folded my arms across my lap, piecing together what it could mean. So much of my discomfort centered in Santa Fe, at the idea of being alone. How, every time I left Albuquerque, I could feel it’s magnetic pull, afraid to jump into the unfamiliar.

I looked at Mark, surprised to see that he’d been staring this whole time, waiting for understanding to light up my face.

“You got it,” he said, answering a question he didn’t have to hear to know it hung within my silence.

“Even if life gets scary, you’re closer to the other side than you think. You just have to keep going.”