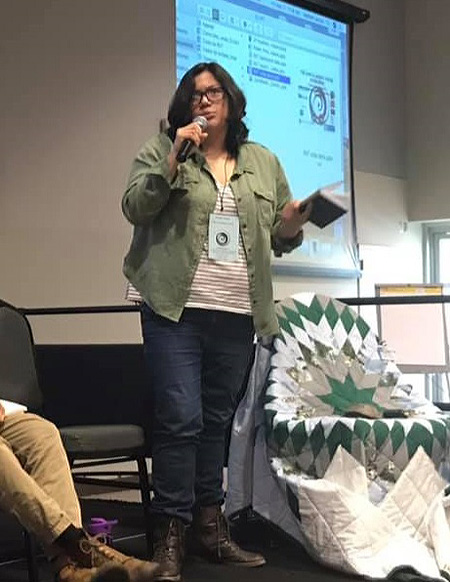 When I was first starting to read more Indigenous-centered climate literature, some things took a while to catch up with me. I noticed that there were a lot of communities that were focusing on traditional languages as a way to address climate change. Although I have always valued the language (my mother spent a great deal of time studying the Menominee language), I will admit that I did not see the connection. What does the way that we speak to each other have to do with how much carbon is in the air or how much plastic is in the water? It’s carbon and plastic no matter what language you describe it in.

As I have grown in my education, I have come to find that semantics are often an important sticking point with me. I don’t like the phrase “climate change”—if I’m not speaking on behalf of anyone else, I prefer to use the term “climate collapse.” I don’t like to be thought of as a “stakeholder” in my community—I’m a Menominee community member, whether I’m holding a stake or not. I try to avoid anthropocentric language, reminding myself always that I am just a part of the land and one day will be quite inseparable from it. I worked very hard on being articulate in English whenever I was supposed to speak. I can introduce myself formally or informally, with a joke or with authority.

The connection was made to me, as it often is, by an elder. I had just hosted an emotionally difficult (if beautifully done) screening of an environmental documentary for the student body. Afterwards, I had helped facilitate a discussion amongst those in attendance to unpack the things we had just seen. The conversation went well but at the end, after listening patiently, an elder in the back stood up and politely asked me who I was. I was a bit caught off guard but after I introduced myself again, she gently explained that it was important to introduce oneself the Menominee way whenever possible—not just in the language, but in the subtle relationships that make up a key part of the Menominee identity. Who am I? Who is my family? Who is my clan? What am I doing here? Why am I here? What are my intentions? Am I humble or proud? Am I asking for something or instructing? Name, year, and major—that only tells a part of the story, and perhaps not even the most relevant one.

After that, I’ve made it a point to introduce myself differently. I say hello in Menominee, say a few brief words in Menominee, as much as I can. I say what I’m doing there, why I’m there, even if I’m the only Indigenous person in the room. Then I say it all again in English. More often than not, I struggle a little bit, much more so than I do in English. It’s embarrassing, but anyone with me understands that I am trying and that counts for something.

And as I’ve done that, I have found myself turning these things over in my head and applying them to the rest of the world. Even the name of my tribe is derived from our relationship with the land. When I travel, I say “Menominee” and people from other tribes often nod, making the connection with manoomin, which is our name for wild rice. It has changed the way that I feel about certain things, invoking a newly found sense of responsibility I didn’t know I felt. I get it now.

The power of language is that it guides the way we think and the way we view things, especially in relation to one another. Is your forest a natural resource or is it a part of who you are, a part that you need? Is your homeland being negatively impacted by this or that effect from climate change, or is it sick? Are these metrics that you need to record or is the Earth trying to tell you something?