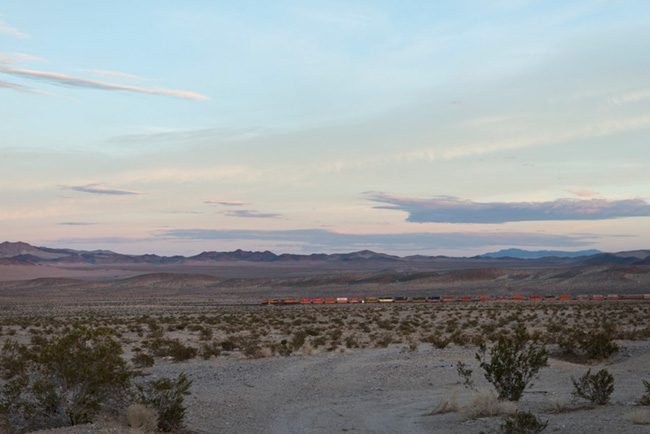 A single penny rattles on the gleaming rail. Horns blare at the first crossing. A low rumble sounds gradually then all at once the train rounds the corner toward the road. Wind rushes across my face as it tears past. In its wake, the penny spins from the rail, flattened smooth.

My mom, sitting on the edge of the empty bathtub with knees curled into her chest, sobbing out a wet I’m okay that thrums a dozen kinds of get out, I don’t want you in here.

L’appel du vide. The edge of a sandstone cliff dropping off. Pinon branches tangle below. Amber yellow sand sticks to the bottoms of my shoes, coats my hands like fairy dust. Rock slopes beneath my feet. A raven circling toward a snag on a strong gust’s updraft, beetle-black feathers ruffled. Psychology says humans underestimate distances. People who fear heights find themselves wishing to jump. A void calling. I think of trains and wind, how I have always wanted to fly.

Steaming popovers nested in a large dishtowel. A smile curls the wrinkles etched into my grandma’s face, her blue-veined hands twist open a jar of strawberry jam, fingers nimble. Oranges plucked from trees in the center of her driveway cul-de-sac form a scattered cluster on the wood kitchen table. My dad and grandma start arguing about politics halfway through breakfast. Every year they argue the same sides. They repeat the same points. later, my grandma and I will climb the boulder she nicknamed Bear Rock, crouching between her house and avocado orchard.

A glass display case filled with dishes tossed from train windows. Shards lie beneath mended plates and mugs. Once, servers on Fred Harvey’s dining cars pitched chipped and cracked dishes out the window as the train chugged toward its destination.

I remember frost-covered mornings. Sneaking out of bed with my mom to let my dad catch a few more precious hours of sleep. My mom’s smile. Huddling in front of the computer at six years old to stare at photos of trains as if they held secrets to questions I have never been able to put into words. Sometimes, once everyone was awake, I convinced my parents to take me to the train station to watch the first trains pull in.

The rumble of a train crossing the trestle in the middle of an argument. My mom and I pause then start all over again. Eventually, one of us will storm out of the room. We return with heavy apologies, aching chests, and hands reaching for hugs. Years will pass before I begin to identify words like guilt and shame in the ache inside my chest.

Items in my maternal grandmother’s basement: A modern highchair stored among relics, pickle jars, folding chairs, mostly empty jewelry boxes, my mom’s first typewriter, cloth napkins, an old desk with scotch-tape peeling from its top. At the back of the room, behind a stud-wall with drywall on one side, the boiler hisses.

A torn, brown stained armchair slouching at the side of the road. A bicycle rusting in the sand. Plastic bottles and beer cans. On the way home, my parents and I turn down an old path. The sun is dipping toward the horizon, shadows beginning to swarm. All of the houses along the tree-shrouded road between the tracks and decrepit train-station picnic tables are empty, roots growing into their walls and windows cracked. The air is thicker. Time passes without seeming to move at all. People say ghosts live in the empty houses. They tap shoulders and peer through windows.

For years, I dreamed of flying. Falling then snapping my arms open. I did not need feathers—this human body was enough. I wore blue to blend in with the sky. In my dreams, I yelled at people who deserved it. I stopped arguments before they began. I knew how to speak without words catching in my throat. I knew when people were drowning in their own anxiety. I questioned and feared, but it only made me stronger. I dreamed I could fly. I wore blue and never told anyone my name. Sometimes I woke up with my heartbeat throbbing in my knees because dream-me did not open my arms quickly enough to imitate wings.

The train arrives with a shimmer. Exhaust leaf-turn and rails gleaming as grinding wheels hush-hiss chunka-click down the tracks. Doors hiss open. Passengers step down to the ground-level brick platform. The train leaves with a slow crank and a chug. For a minute after it vanishes between tree and hill, the bricks beneath my feet reverberate every story I’ve told back into my ears. My own voice echoes beneath the train’s rumble. For a moment, I am weightless above shaking ground.