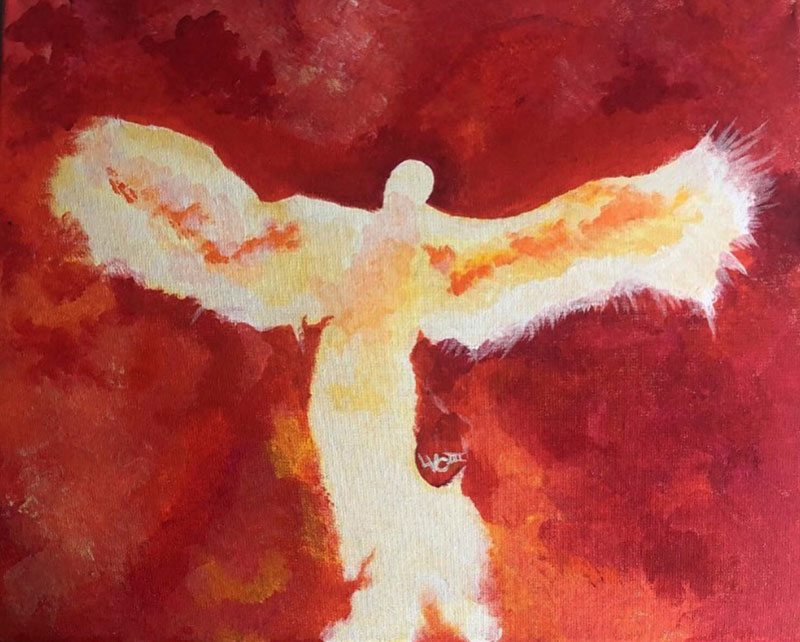 It was a weird place to remember her name.

“What you’re thinking. You know it’s not wrong to feel what you feel, though they say otherwise.”

If I was the person I am now, perhaps I would have been adamant. But she was older and far beyond me from an educational standpoint, so I remained quiet. Perhaps she suffered the same inflictions? I never knew. For that was the last I saw her.

As I stand over the translucent lake years later, the little waves gold below dusk, the pills tremor in my hand. I raise them, lower them, raise them again. . . .

They say an insane person repeatedly does the same tasks in hopes that something will change, or something.

But I am not insane, just retarded, right?

I lower the last of my pills in one container and remember.

I was never always quiet. As a kid, I was rowdy, distracted, and sort of mean, but I meant no harm. In jest and for pure amusement, I would stick out my tongue at other students, call the plumped kids fat, and irritate them, sadly, reflecting back, mostly for attention. I didn’t care for academics as I should’ve, but I was adventurous, I was a kid, and more importantly, I was inexperienced, stupid—as all kids sometimes are. I remember the scolds I got from my male teachers, aghast demeanors from female teachers. I truly felt terrible, however, my empathy never showed, and they mistook it as a blank slate.

I was prescribed pills for many things: ADHD, depression, and ADD. Because of these, I couldn’t sleep and felt queasy. Eventually, for a short period of time, I was considered retarded.

I was sent to a class for such specific dispositions. I was held back for a year, nearly another. Worst part was, I never knew this was happening since I was in elementary school.

It wasn’t until high school that I realized my drawbacks. When I went into middle school, I was released from my “special classes,” but I still required pills. And I took them obliviously. High school was where I made friends who were one grade ahead of me—my only friends, in all honesty. I never did well with kids in my grade. I hardly blame them. It was then that the conversation came up that I should have been in the same grade as them.

“Weren’t you born on August eighth?” inquired my friend, whom I secretly fancied.

“That doesn’t make sense,” said one of my bestest friends. “I was born on August 18th, so you have to be in the same grade as us.”

“Held back a year?” asked the boyfriend of my crush.

I learned the truth from my auntie, way after at the end of my senior year.

My mother raised me solely by herself. She wasn’t the most responsible. She drank and would secretly down my pills to get high. That must’ve been why I stayed at my auntie’s instead. But this wasn’t the only answer that placed my bafflement at ease.

Staying after school one night in my junior year, after helping to clean up the aftermath of a winter party or something, I overheard teachers speaking to each other. I played on my phone nonchalantly, waiting for my auntie to pick me up.

It went something like this: “Some teachers would rather send their students straight to the nurses office than teach.”

“And it has only gotten worse. The need for medication has increased in the past decade.”

“They don’t know how to handle kids. They make one misbehaved notion, and off they go.”

Before graduation, even a little before, I tried relinquishing myself from pills that shouldn’t have been mine—pills better for another—but I was beyond the point. Taking pills nearly your whole life, you end up craving them. My body would be restless whenever I slept. My leg, my arm, and even my chest kept spasming, and I was severely depressed, worse than I’d ever been. It was like a great weight plummeted on my chest—a figment of a weight more terrible than reality. For if it was real, I could heave it off of myself, I could feel it loosen and rub my skin, and have a sense it was coming off. But in my head, it was inescapable.

I submitted to my addiction.

I wonder if I would have graduated with the bestest friends I ever had if such hastiness never occurred? Would I have dated my crush if we weren’t separated?

Instead of throwing my pills, I crashed onto the earth and bawled out into the cold night with the heat from my sorrow to keep me warm. I cried until the fireflies came out. Before, I went cold-turkey not three days ago, and it has only gotten worse.

Even now I feel my body jittering, my hand reaching over the baby-proof cap that couldn’t keep a crying baby like me from opening it. But I stopped myself before it ended. I saw this scenery before. In movies, comics, even in my own mother. The first pill was touching my lips. Realizing the horrific repetition, I allowed my arm to become lifeless. Do I resent what happened? Do I regret? No, for along the way I met wonderful people. People who actually listened: my teacher during my “special classes,” the nurses who handed me my pills and who gave me a box full of Snickers one Christmas. And perhaps I would’ve never met the friends I made if not for such occurrences.

I pull back my arm and closing my eyes, thinking of nothing in particular, I let the bottle fly.

Julian Wallette is a student at Turtle Mountain Community College.