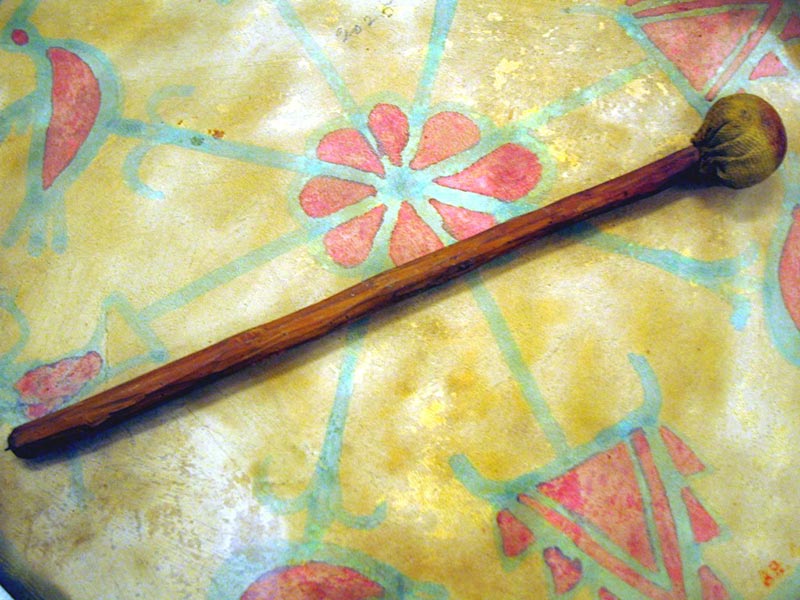 Tambeh-sedo craves to be heard. Drums live off the tediously ground prayers that are cornmeal. They should soak in fresh air and sunlight daily, given the chance to absorb the happenings of the world. That is how they feed their tempo.

This drum sits in the corner, and for never being used he looks worn and tired. Modern women live here rushing past him in leggings and boots, smelling of coffee and perfume. These women are potent with traditional knowledge but none of the time to practice it. Alerts and alarms start their days, not the feeding of the drum. Tambeh-sedo is clothed in tight sinew and a lively floral scarf to keep him warm, but mostly he slumbers in his corner, unheard and unknown to visitors. If he had not been mentioned now, would you even know he was here?

He has lived in this adobe home longer than the women. He carries stories within his hollowed cottonwood core. His body was harvested at the river, when the flood banks still dampened. Crafted, not born, and handsome even in sleep. Without a singer in these walls for generations, there was no opportunity for his awakening. When she was young, one of the sisters was tempted to go out into the Pueblo plaza just to hear the drum’s voice. To sneak a beat under the stars and return him back to safety before anyone could wonder where that drumming was coming from. But what if he deflected the strike of a woman? old Tewa men are set in their ways, keepers of the rhythms for female feet to dance to.

The home is always warm from fresh oven bread, but the heat does not reach the drum. He only sees the crumbs left by little boys running past. These boys are young and living like heroes. Instead of a poster of superman, the home has Po’pay on the walls. He wore his hair long and tied with coral. It was his shield. Po’Pay rode a mule, not a horse, because mules are sure footed and steady. He smeared his face with napu-shun and wore red silk for a cape. The little boys run around with their shirts off, riding the rez dogs, pretending to be him, the protector of this place.

The boys have two different fathers, one Tewa, one Spaniard, and neither have the grit to live here. Dwelling in a traditional home comes with cultural duty, like feeding the drum. The vigas rain dirt, held together by only straw and mud. The dusting must be swept with straw brooms. The walls are so thick there is no cell service, and the outside washes away after a storm. Holding in the cool, hugging the warmth, the adobe is a temporal repository of memories.

Rising with the sun, the women in their yoga pants and slippers need firewood for the outside oven. The drum watched as those fathers slept in without tending to the matriarchs. Tambeh-sedo could hear both of their rhythms. Let us move into this Pueblo woman’s world and crack the adobe walls. They must have forgotten Tewa women used to climb ladders with babies tied to their backs and pottery balanced on their heads. Granddaughters’ descendants have learned to plaster the cracks, with manicures and hearts intact.

The windows were once mica and the flaky amber mineral drizzled sunlight onto the drum. When the mica cracked it was replaced by glass and covered in lace. The village women would gather and trade their favorite fabrics, reds for winter, yellow for summer, divvy them up and sew each other’s dresses. Giggling and teasing, braiding hair and stories with ribbons. The left-over material would be cut for the windows. The ladies would save the special lace for their daughters, when they married, so they could hang womanhood over their windows. As a favor to their father, these women keep the lace tacked up.

You could buy real curtains you know? I will hang them up for you, men have offered. They miss the point. Their mothers should have taught them about delicate fabrics.

It would hurt their father’s feelings if they changed too much. He was the boy who lived in this home, with the drum, long before the remodel. He slept on the floor with his cousins waking to the smell of tortillas and Tewa between Saya and Teh-teh. Those were the days when children were given to their grandparents to raise if a family had too many. He played sheriff with a crooked cowboy hat that fell over his ears. Pushing it out of his eyes, lassoing the dogs and pigs. Tambeh-sedo watched him grow. He was skilled with silver and fire, fingers meant to forge not drum. He fed the cornmeal and prayed to the cottonwood and sinew, but the drumstick lay untouched.

He has gifted the home to his unmarried daughters so lace and the drum must stay. Pulses preserved in the repository. With the little superheroes soaring around the house, arms extended and hair wild, the drum quivers slightly. There are finally boys in the home mixing dirt with their feet, tracking in mud. Tambeh-sedo stretches and greets the lace, sengithamu. Perhaps one morning soon, a little hand will feed him and the village will feel his tremble.