Home » The Knife-Edge of Holly

The Knife-Edge of Holly 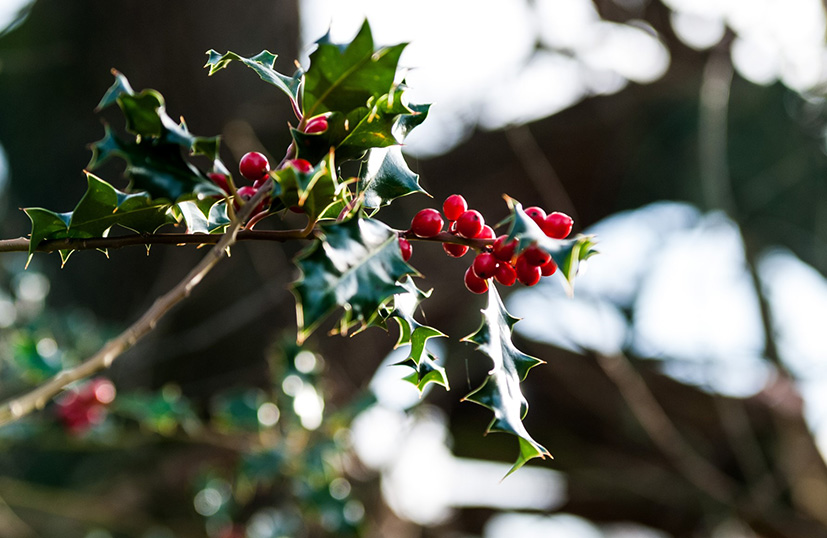 By the time I realized I needed to gather holly from the tree beside my window, to wrap them in clothes and send them miles away, it was too late. My connection to holly had been severed years before I received the call that it was a curse-breaker, the release of a hold I didn’t yet know to fear. In my childhood, it was simply a towering holly tucked into the crook of my window’s embrace. I grew into its branches, felt its wood warm to my palms, and hid at its base like I could disappear. It was a hallowed shell, inviting me in. Its waxy leaves never pricked my skin. Over time it grew into a ladder, and I’d steal nights on our hurricane-battered roof, its branches skimming my bare feet as if reassuring I won’t let you fall. In each waxy palm it offered berries, slick-red. I’d crush them into paint, mark my knuckles, and pretended to venture into forests that tried to take me whole.

No one told me I was always meant to lose her. To this day, I wonder why they did it. I might’ve scared the neighbors with my face hovering so high, a tiny moon rising. It could’ve sparked a call to protective services: Hello? There’s a little girl crawling around a roof. I simply woke one morning to chainsaws revving inches from my bedframe, glass separating the bite of steel, and watched my window flash from shade to an unrelenting sunlight. I’d lost a cradle, a ladder, an embrace that felt more nurturing than even a mother.

By the time I was on the other side of motherhood planting my own holly, it was already too late. The healer never received them in time. I was miles away, next to roots that had been pulled, aching, from the earth. I would feel, all over again, how holly could be severed, pooled in red, from the scarred earth of a mother.

The healer knew when the berries wilted, when my body carried ashes instead of red berries. In the time since, my family has repeated the cutting of every single tree I have recognized as my own, in every state I have been in, of every house, of every window. Holly has held fast as the hardest breath hushed, cut short.

In the years after, I have read how holly matures according to a combination of DNA and stressors in its environment. To survive, holly will sharpen bite-marks in her leaves until knifepoints are carved, creating the bundles that frame Christmas cards and holiday wreaths. The higher holly rises, the softer she becomes, the gentler she dares to be. Not everyone will feel her edges soften, or receive her berries in turn. But I have held her berries, have become the extension of her branches through my body. Even I have learned to sharpen old wounds. Like holly, even as we were cut down from the inside out, we never once stopped fighting.