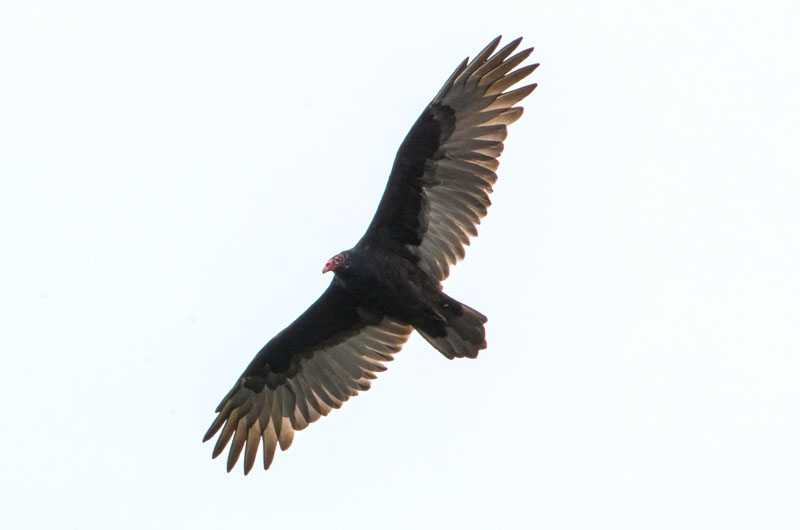 I am going to tell you a story, a story told to me by my grandfather. I am Dineh, the people of the Southwestern United States. I was told about the animals and their roles or how they became the way they are. This is the story of the turkey buzzard.

The turkey buzzard was once a very regal, colorful large bird. It was as large as the eagle and this bird could fly just as high. The bird was flying and surveying the land beneath him. He flew with the eagle and while flying he noticed an animal was dead. He asked the eagle if he wanted to go see what happened. The eagle told him to not look at the animal for it was now dead. It was no longer part of this world, it now belonged to the world of the dead. To contact it now you would be speaking with a ghost and this was not acceptable, as the ghost may communicate with you somehow. It was taboo and could end up taking you with them. The turkey buzzard said nothing and continued his flight with the eagle.

The next day the turkey buzzard was making his rounds and flying high above the Earth. He flew so high that he could see the edge of the Earth; it was the highest point he had ever been. He was descending back to the Earth when he noticed another dead animal. He didn’t have the eagle with him to give him advice so he figured he would just go check it out. He saw it was a dead prairie dog. He landed beside the prairie dog and inspected it. The prairie dog was dead, a sickness had been killing them.

The turkey buzzard asked the dead prairie dog, “What happened to you?” He expected no answer as the animal had passed away, but he figured he would see what happened. To his surprise, the prairie dog answered him.

“We are sick, a sickness has overcome our people and we are dying.”

Baffled that a dead animal was talking to him, the buzzard said, “A sickness? Why and how? You all live under the ground, nothing should make you sick since you have the protection of the Earth. You must have done something to deserve this death.”

The prairie dog explained, “We have something that comes for us at night and takes us to the other side, the side of the world known as death. I am dead, so why are you even talking to me? Do you not believe me?”

The buzzard, confused and enthralled that he was talking with a dead animal, perhaps even the spirit of the animal, responded, “The fact you’re dead doesn’t scare me. What fascinates me is how did you get to this other world? How can you speak with me? What will happen to your body?”

Prairie dog said, “It is wrong to be fascinated by the other world, this world is forever dark. I cannot even see you. Your voice is the only voice I can hear. Even though it’s the only voice I hear, it is not comforting and I feel like I need to be at peace now so it’s beginning to annoy me. My body? I don’t know what will happen, I believe I will return to the Earth.” Annoyed with the buzzard, the prairie dog stopped talking with the buzzard. The buzzard realized he wasn’t talking anymore and left the dead prairie dog. The turkey buzzard returned to the sky.

Flying around, the buzzard decided he should survey the land and search for something to eat. He found nothing, but he still noticed the dead prairie dog’s body. He started to feel the hunger pangs. Turkey buzzard decided to go to the dead prairie dog. By this time, the desert heat bloated the prairie dog and he began to smell. No one was looking, so the buzzard decided to take a bite of the rotting flesh. This was not good, as the Navajo way is to leave dead things alone and not to touch them at all. The prairie dog was at his final rest and deserved to continue resting. Buzzard had interrupted this sacred time. The Great Spirit was watching this entire time and he continued to observe the great turkey buzzard.

The next day, the turkey buzzard decided he wanted to fly higher than he ever did. He did not know that flying this high was dangerous. The eagle had never flown this high before and he wanted to see what was beyond the blue sky. The buzzard was mid-flight when his friend the eagle joined him. He told the turkey buzzard that the stream was good today and he caught plenty of fish and that he should join him. The turkey buzzard explained to the eagle that he wanted to fly above the blue sky and see what was beyond it. The eagle told him not to do it, saying, “Behind that blue sky that is eternal black. It is where the spirits of the dead go. This is why the night sky has all the souls of our ancestors and they light up the sky with their beauty at night. We sleep at night to let them communicate with us in our dreams. That’s why we do not speak with the dead during the day. They can communicate with us and perhaps take us with them when it is not our time to join them.”

The buzzard laughed, “That’s nonsense! I have spoken to a dead animal and nothing happened to me! That is all nothing but superstition.”

The eagle said, “Well if you do not believe me, go find out. I warn you though, I fear for you and your people if you try to meddle with things you do not understand.”

The turkey buzzard said, “I understand, I want to find out everything and I fear nothing. I have even eaten the dead flesh of the prairie dog I spoke with.”

Shocked, the eagle stared at the buzzard. He didn’t realize that they were so high and close to the edge of the sky. The eagle skydived back toward earth yelling, “DO NOT GO TO THE EDGE OF THE BLUE SKY!”

The turkey buzzard was curious about this edge at the end of the blue world. He saw the vastness of the black above him. He saw the beauty of the blue sky and the curvature of the Earth; it was all one big sphere. “We live on a round stone!” He gasped and realized that he was too high and his head peaked out of the protection of the blue. All of the beautiful feathers on his head instantly vaporized and were burned off. His head was now raw, reddish-pink and painful. Upon seeing the other side and what seemed like an eternity that his head was burning from being on that side, turkey buzzard heard a voice.

“This is the Great Spirit, and I have been watching you. You have been given the most beautiful coat of feathers of any bird on this earth. You are as big as an eagle, sometimes bigger. You have the power to go anywhere. Yet, you decided you want to see things that are not for you to see.” The turkey buzzard could not talk but felt the pain of the feathers being plucked one by one from his head and neck. “I will spare your life and since you are so fascinated with death, I will allow you to return to the beauty of the blue world. You will not return the same way though.” The booming voice explained, “Up here you will lose the feathers from your head because you decided to peek beyond the blue. I will also take the beautiful colors from you because the color of death is black. This will remind you and others that when you are around so is death. You will only consume that which is dead. You will forever eat the flesh of the dead. Because you are fascinated with all of this, your people will all come to look like you. After pulling his now painful head out of the black, the turkey buzzard realized that he was no longer the same. He was now gasping for breath as he could not breathe the thin air. The turkey buzzard passed out and started his slow descent to earth. He floated back down in a slow circle.

Once he caught his breath, he realized he was now back in the desert. He saw lands familiar to him. All of the animals saw this strange new ugly bird and ran from him. The eagle no longer knew who he was and did not even acknowledge the turkey buzzard. The turkey buzzard tried to fly with the eagle but could not keep up. He saw only dead animals, he noticed dead animals even more than when he was once a majestic colorful bird who commanded respect. His fascination with the dead caused his people to become what we see when we die: a big black bird circling overhead waiting to feast on our flesh.

Edwin Dale Harris is a student at Oglala Lakota College.