↓ Skip to Main Content
Home › Blogs › What Is New Is Old

What Is New Is Old 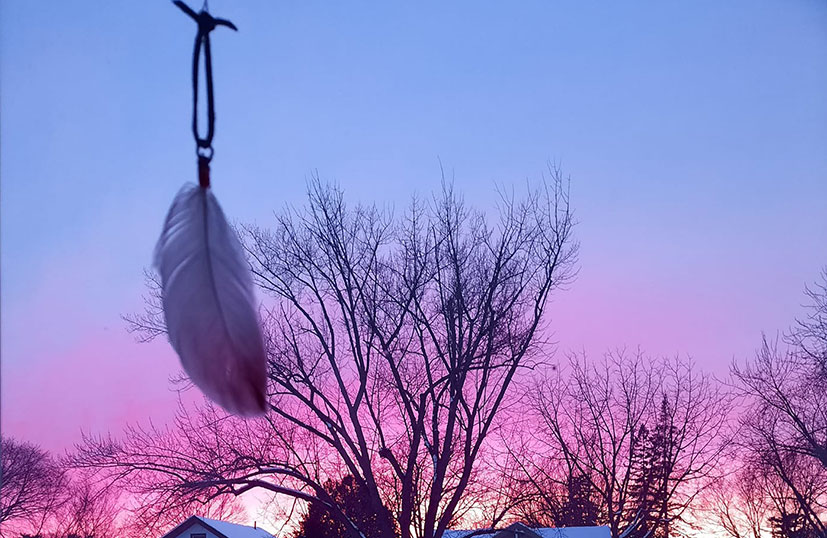 I have been thinking a lot lately about the ways in which we have coped with COVID-19. I say this as if it is some profound mountaintop-style thinking that I am doing, but in actuality I just miss powwows.

Like pizza, powwows—even when they’re maybe not the best—are almost always pretty good. But for those who have never been to the Menominee reservation in August, the annual summer powwow in the Woodland Bowl is an absolute feast for the senses. Here, we bring dancers into a big open-air arena where they dance under trees so tall, it’s hard to look at them all the way if you’re standing on the ground near them. The damp grass takes on a particular smell, mixed with fried foods, patchouli, and sweetgrass so that every breeze imbues you with the unmistakable scent of summer. The Woodland Bowl is the first place I saw the Milky Way—I was waiting for a friend after some pre-powwow festivities and the lights cut unexpectedly (someone tripped over a cord or something) and up above me, a thick band of glittering stars was strewn across the sky like diamonds. It felt like a thick veil that separated me from the rest of the universe had been lifted without me ever even knowing it was there. Once, I had to miss the powwow to go off to another city and do some really important and invigorating work in a place I had never been before, but the sound of a jingle dress while my colleague got ready for photographs filled me with a sense of unfathomable grief and longing for home. I vowed never to travel in the first month of August again.

But the powwow is not just a place for us to gather with friends and relatives from distant places. It’s also an important part of our local economy, both at the tribal scale and at the individual scale. Beaders and crafters make their money off the powwow, as do small-time food vendors. A significant part of my mental energy has been spent in the last year trying not to think about how we will feel the impacts of COVID-19 economically for a very long time after the pandemic is over.

And yet, it doesn’t mean that nothing is being sold. It also doesn’t mean that we aren’t keeping in touch with those distant friends and family whom we haven’t seen in a year, or maybe two or more. It means that we can’t hug them or go swimming with them, but nonetheless those connections are being maintained. Some friends I talk to more than ever because I know that I can’t rely on being able to see them when I come to visit in the spring. I buy way more crafts online from Indigenous vendors because I know I won’t be able to browse and pick-up new things at the powwow or the next time I’m at a craft market in some distant city. I have spent more time on Social Distance Powwow watching dancers with far off styles than ever before. I have spent more time looking at other peoples’ moccasins and looking at other designs of ribbon skirts. I have talked more deeply with Indigenous people from other places and learned more in-depth about what it’s like in their world, so far away from mine.

In a way, this feels new. Such things would not have been possible before the age of the internet, or even before the internet became so ubiquitous. It was not too long ago when not everyone had a camera that they could take with them in their pocket wherever they wanted to go. But in other ways, more meaningful ways, it actually feels very ancient. Where our ancient travel routes crisscrossed the country, bringing jewelry and seeds and materials across the land for trade and as gifts, the powwow trail formed. We’d travel in RVs and dressed-up old vans with a futon in the back for sleeping instead of on loaded-up sleds with furs. It is from this evolution of routes that Indian Country, despite being the length and width of whole continents, became the small, close-knit community it is today where you can go almost anywhere where other Natives are and eventually find someone with whom you have something in common. Someone once observed to me: “Wherever there are other Natives, you will find each other. It’s like a special sense. They can recognize you and you can recognize them even if others can’t.” And it would be easy to assume that when we could no longer travel and no longer gather, that that tradition would end. Instead, it changed and it digitized. It turns out that the need to be connected and to know one another and to trade and to exchange ideas and ways is not something that can be stomped out so easily. It’s nice to know that as long as there are other Natives out there, we’ll find each other. And if we can’t, we’ll keep looking until we do.