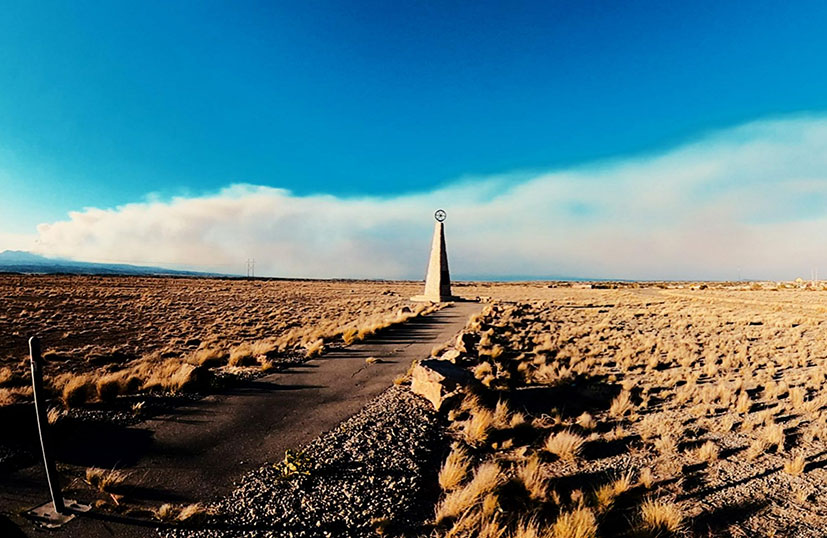 “Alright, so the Lodge was available after all!” Alex says into the receiver. “Check-in’s at four, so if I leave now, we can head over when I reach Santa Fe.” He pauses, waiting for my confirmation, or maybe a food recommendation when he arrives, ragged from his sun-beaten motorcycle trip.

Instead of answering, I am pinned, speechless, on the edge of town. Smoke plumes have painted the sky a hazy amber. The sun spends each sunset sipping an inky smoke cigar. For weeks, I’ve smelled wildfires ghosting through air. It’s the first thing I choke on in the morning, gasping as I rise from bed, and the first thing I taste swirling with the creamer in my coffee. Overnight, Santa Fe has become a dartboard center, with each fire-map throwing darts as fiery rings, each aim stabbing a little closer to home.

On the phone, Alex sighs.

“I know what my mom said is insane,” he says, thinking of a different firestorm. “I can’t believe it either, but let’s try to have fun. The hotel has a pool, so we can swim before getting take-out?”

How do you tell someone oh, it’s not that your mom threatened to stab me, did you know the state is going up in flames? Instead, I ignore the angry smog embering the clouds, try to fill the air with simpler things. I don’t know, maybe wings and fries for dinner? Has your mother apologized? Well, make sure to fill up the motorcycle before you go. See you soon.

By the time Alex sputters into town on the bike, dusty from the highway, smoke curtains the sun into an early dusk. He yanks off his helmet, takes in the sky for the first time and coughs into the gutter.

“Well,” he says, realizing I’ve gone from one fire to another. “It’s still better than my family, right?” We laugh, uncertainty settling in.

The check-in, too, is tinged by wildfire. The front-desk woman questions us with compassionate eyes: Are you here because of the fire? Evacuees? Have you been directed here by rescue?

At the pool, we squeeze into cheap swimsuits, sink into the warmth of the tub, and listen to chatter from people chased here by smoke. A man offers us tequila at the water’s edge, takes swigs, and tells of his family’s land in Vegas, eaten by fire. The hot tub grows into a deafening mini-party of evacuees, and I search for Alex’s hand in the darkening water, tugging me up and out.

We slip into the empty pool, chilled by cooling desert wind and float to the center on our backs, tethered at our hands. We stare at a sky purpled with smoke, splitting the red sunset in two.

I know we can’t hover forever in this buoyed in-between of wild families and even wilder firestorms but, here, holding his hand between fire and water, each inhale feels lighter, lessening the ash of wildfire mouths that have been burning me down for weeks.